WHAT IS IT about gold? Women adore it. Men will die for it. But,although gold saw many men to their deaths, it also made fortunes for others, and was the catalyst for population growth and subsequent infrastructure development that we now take for granted in many outback places.

GHOSTS OF A GOLDEN ERA

You may already know that Charters Towers was Australia's richest major goldfield, but I'll wager a beer that you didn't know the gold here was discovered by runaway horses?

Well, not quite. In 1872, after a trio of prospectors lost their horses in a thunderstorm, their young stockman, Jupiter Mosman,discovered a nugget while looking for the frightened animals; the rest (as they say) is history.

Within a year, over 3000 people were trying their luck in the new goldfields. Charters Towers' golden era was the period between 1882 and 1893, which saw many grand buildings rise to line the streets.Maximum gold production was in 1899, when the thriving city of about 25,000 people was even known as "The World" - a place where you could find almost anything you might want.

The gold never actually ran out, but, as the shafts drove deeper and the price of gold fell, the mines became unviable.

These days, there is much to explore in this city filled with the ghosts of the past. You can visit the Venus Gold Battery, Stock Exchange Arcade, one of the several museums, or just stroll around the Victorian-style buildings. Towers Hill provides great views over the city, and up here you can scramble over the silent ruins of the gold smelter and its chimney.

Charters Towers is also home to one of the last working drive-ins in North Queensland. The Tors drive-in is always a hit with the kids, and delivers a touch of nostalgia for those a little older.Fresh burgers and hot chips made from fresh north Queensland potatoes make for a ripper meal between movies.

If you have the time, take a trip to the heritage listed township of Ravenswood, the first major mining town in Queensland. Only two pubs remain, but the Imperial and Railway hotels are impressive,and still ready to provide you with great food and a beer.

Driving beyond Ravenswood you find the impressive Burdekin Falls Dam, a concrete monolith almost 900m wide, holding back Lake Dalrymple. It contains about four times the volume of Sydney Harbour, and provides water for the Burdekin River Irrigation Scheme, as well as for the Townsville area.

The dam is stocked with barramundi as well as other species, so fishing is good.  Like most Queensland dams you will need a stocked impoundment permit (SIP).

You can drop your boat in at the ramp but care should be taken due to submerged rocks. Some saltwater crocodiles are known to live in the dam, so swimming isn't recommended.

If you happen to be here after a really heavy wet season, the water level can be running up to six metres over the 37m high spillway,which is aways an awe inspiring sight.

You can choose to camp as civilised or as rough as you want to.There are several caravan parks in town, or, if you like a bit of space, you can camp out of town.

Dalrymple National park is located just 42km north of the city on the banks of the Burdekin River.  You can choose between the Burdekin River Camping Area, where you will need to purchase the usual QPWS permits, or the free Fletcher Creek camping reserve,which is managed by the local Council.

Burdekin River camping area is true bush camping, with no facilities. You are not permitted fires or generators, but with only four designated sites, you can be sure that it will not be crowded.

The Fletcher Creek camping reserve has no defined sites, but has flushing toilets and cold showers. Fires and generators are permitted.  And it is free. The downside is that it you can't fish the creek, it's adjacent to the highway and it gets crowded during long weekends and holiday periods.

THE BEST OF BOTH WORLDS

The last few times we have headed out Charters Towers way, we camped at Bivouac Junction, which is located about an hour and a half's drive west of Townsville, and about 15 minutes from Charters Towers, at the junction of The Burdekin and Fanning rivers.

Owners Joe and Sarah have set up Bivouac Junction as an outback holiday park. With a swimming pool, powered sites, hot showers and a camp kitchen, it is civilised enough for those not keen on roughing it. But, with 50 acres in which to spread out, you aren't forced to listen to your neighbour's collection of greatest banjo hits. Snag one of the sites overlooking the river, and you can easily forget you even have neighbours.

Unlike your typical caravan park, here you can enjoy open fires -one of my favourite parts of camping. The fascination of taking a perfectly good marshmallow and melting it into near oblivion keeps the kids entertained for hours.

If you enjoy mixing with others, there is a large communal fireplace where the park regularly puts on a tasty damper for anyone who is interested.

Pets are permitted if kept under control, and there is plenty of space for your little human animals to kick a football, ride bikes,play cricket, or just have a kip under a tree.

Fishing the Burdekin River is one of the main attractions and we caught enough fish to keep the kids interested. You can also try your luck with red claw pots along the banks.

There is safe swimming in the Fanning River, and the kids had a ball in the water and river mud. On our first visit after the wet season, the Burdekin was flowing a bit fast for swimming. On subsequent trips however, we have found it perfect, although the current is strong enough to make a flotation device essential for younger swimmers.

Kayaking or canoeing is a perfect activity to fill your day, and you can hire them from the park if you don't have your own. If you've never tried kayak fishing, then you're missing out on a lot of fun. You can get in close to snags and rocks, or head out to the deeper holes in the river.

Bivouac Junction is a perfect destination for both north Queenslanders who want a great weekend camping spot, and travellers passing through on a longer journey. The Charters Towers area hasso many interesting things to see and do, you'll want to take a few days to enjoy it all.

Now if I owe you a beer from my earlier wager, you know where to find me on a long weekend. 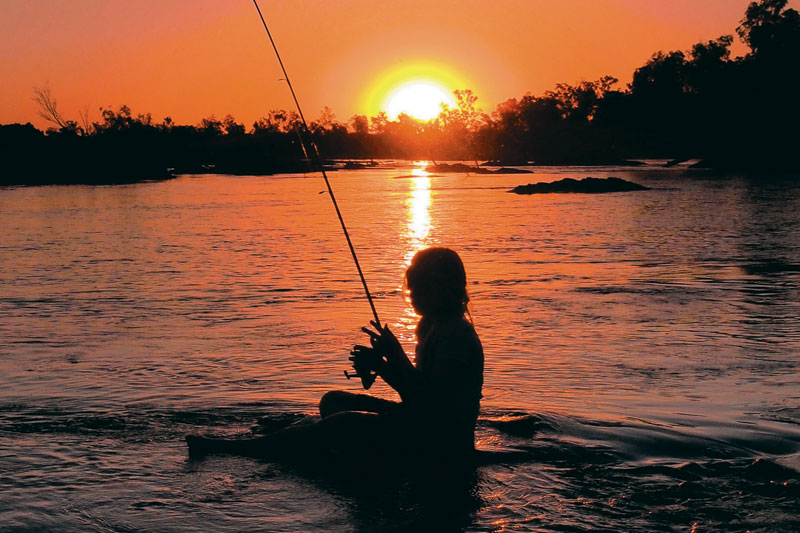