If you’re the sort of camper who likes to push a little further than the rest in order to find your own little slice of heaven, you’ll need a go-anywhere trailer; one that’s capable enough to get dragged through the worst of it and make it back home in one piece. That’s where Conqueror’s range of Urban Escape Vehicles, or UEV for short, comes into its own. In fact, you could happily say that’s exactly what these rigs have been bred to do. They’ve got nothing in the way of shiny chrome or fancy knick-knacks, but what they do have is a unique no-bull approach to things, which believe it or not is getting bloody hard to find these days. There’s a real military style and flair to these campers; you can just tell they’re built tough as nails for a genuine reason – to conquer anything.

HOW DOES IT TOW?

Northern New South Wales was the direction we took the UEV-390 Escape, and as usual we really wanted to give it a good and proper test. So instead of just hugging the coast we tackled a whole bunch of inland bush tracks along the way. Now I’ll get to how well it handled the tracks in just a minute, but before we do, there’s a heck of a lot of tar road to cover between dirt roads these days so it makes sense to get a good understanding of how well it tags along on the blacktop, too. It weighs about 1250kg Tare, but we had it fairly well loaded up – think three people, camping gear and supplies for three days minimum, plus a truckload of camera equipment. The ball weight felt nice and balanced, in fact I could still shimmy it around by hand with just a little sweat while it was loaded. Like you would expect, it tracked as straight as an arrow, but what was quite impressive was how stable it felt on the road. The tent sits up pretty high, so you could be forgiven for thinking it would be a bit top-heavy. But nope, it stuck to the road like glue and seemed nice and cushy yet firm and stable. In fact, I had a heart in throat moment when a P-plater decided to pull out from behind a semi-trailer at 110km per hour on the freeway. I swerved and narrowly avoided a nasty accident, both in my pants and on the road, but the trailer performed perfectly. No extra sway and no instability issues like I’ve seen with plenty of other campers. 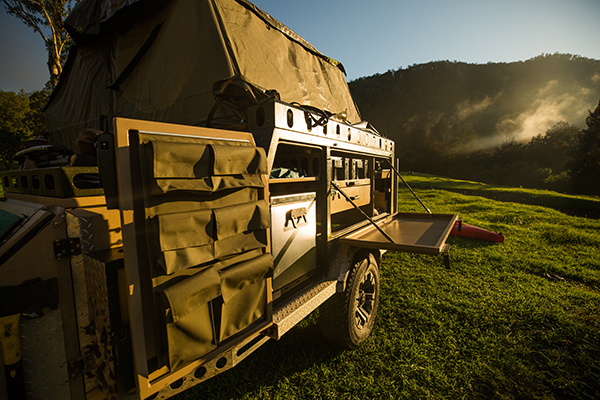 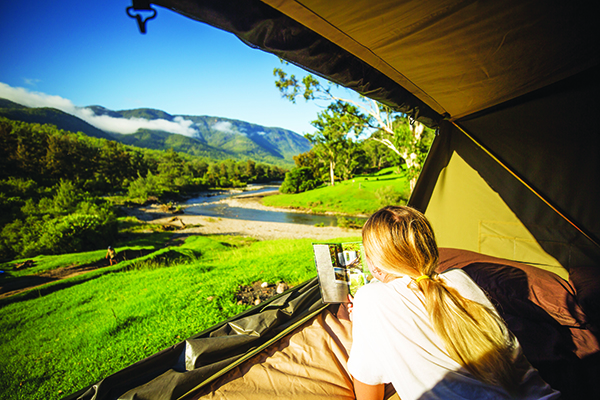 If you enjoy the simple things in life, you’ll love this rig. It’s about as refined as a bogan on a big night but it has a real trustworthy sort of feel to it. Pretty much everything is made from metal or canvas, from the compartment doors to the kitchen. Strength, rigidity and functionality are refreshingly ranked higher than just smart and fancy looks, with proper hex bolts being used instead of pop rivets and rugged latches throughout the camper inside and out. While I personally liked the raw feel to it all, those with a gentle touch might find it a bit rough and ready for their liking. The front storage box latches aren’t particularly user friendly and I developed a bit of a love hate relationship with the compartment lid latches. I loved how tough and sturdy they were, but fitting a linch-pin with elastic to each latch every time you needed to tow it got a bit monotonous.

A few bits of chain allow the main compartment doors to flip down and turn into big massive benches, which we all know comes in super handy.

The kitchen set-up works well, too; there are a few hidden bits that just keep sliding out until you’ve got everything you need. Not pointing any fingers but somebody forgot to fill the gas bottles up, so we couldn’t test the stove out, but the rest of the kitchen was a very practical, functional set-up to use. It sits at a user-friendly height, takes less than a moment to set-up and the twin washbasins, cutlery, crockery and glassware set is a nice touch too. I’ve definitely had easier kitchen units to slide out, buy hey, it won’t break!

The UEV-390 Escape proved to be a nice and comfortable camper to live out of. Although the tent is a softfloor design, it can be set-up quite easily for an overnighter in a few short minutes. That’s thanks to the simple flip over design with a minimalistic yet smart internal pole arrangement. The canvas has that real heavy duty old school feel to it and it seals up pretty well to keep the bities out, too. It’s a fairly basic but functional tent with no internal lighting, but there are some canvas pockets which come in nice and handy. There’s plenty of ventilation thanks to the massive window next to the bed, but being that big means it’s an all or nothing kind of deal, which isn’t ideal if you just want a tad more air without opening the whole lot up. A few smaller side windows with zippers would go a long way, but that’s just personal preference. I’d happily say there is actually more overall ventilation available than most campers allow if you need it.

The massive king-size bed is a welcome attribute. It uses a flip-over bed base to get the extra size, and is nice and easy to climb up into providing the ladder doesn’t get packed on the other side of the bed – yep, I learned the hard way! There’s also plenty of room for the kids to sleep inside the tent, although you might have to arrange their bed around the main ladder, which sits in a bit of an awkward spot. There is an optional add-on room that would make a big difference here, though. Plus, you either have to duck under the bed or flip it back over to access the storage on the side of the camper through the internal canvas flap. It’s not much of a problem unless your partner is still sleeping and I reckon the king size bed it definitely worth it!

OFF THE BEATEN TRACK

This camper is built to go anywhere, anytime and it doesn’t need to look good on paper to do it. The UEV-390 Escape uses a solid square axle with nice, sturdy spring hangers and tough eye-to-eye leaf springs to get the job done. While independent suspension does have its advantages, don’t underestimate how well a properly set-up leaf spring solid axle system can perform. After dragging it through a bunch of rugged riverbeds and rough tracks, I can honestly say it works better than plenty of the independent systems I’ve tested over the years. There’s also enough ground clearance to drag it anywhere your 4WD will go, and the all-steel construction gives it plenty of brute strength. The trade off is with a Tare weight of 1250kg it probably weighs a little more than you would initially think. Plus, I did find it a little odd the under slung water tanks didn’t have a shield to protect them a little better. It runs twin poly tanks which are nice and thick and run the length of the trailer, which helps distribute the weight evenly. There’s not much to get snagged on under there, either, in fact the stabiliser legs mounted on the side of the camper are a great little set-up that keeps them out of the way and super easy to access.

STORAGE FOR THE MASSES

If there is one thing this camper excels at, it’s storage. It’s got bucket loads of it, and while it pretty much comes with everything you need, there’s enough room to add your own bits and bobs. Perhaps an even stronger point is just how accessible that storage is. In fact, there’s not a single compartment you can’t access at any given time regardless of whether it is set-up or packed away. If it lacked anything, it would be the ability to carry anything too large or bulky due to the segregated style of storage boxes – my Weber barbecue had to stay home thanks to that.

The 90L fridge/freezer from National Luna offers plenty of space for those longer expeditions. In fact, they’ve got a hard-earned reputation for being super reliable with impressively low power consumption figures. The front jerry cans are at a nice and easy-to-use height, and a few bags of firewood sit perfectly on the storage rack up top, too. The shovel and axe are mounted on the side making them nice and easy to access, and yes – they’re lockable.

This camper is a real breath of fresh air if you’re after a proven set-up without the frills. It’ll have you living comfortably in the bush without resorting to all the fancy pants shiny bling to show off. It uses the perfect combination of good old-fashioned components and plenty of real world experience to build the foundation of a tough, reliable and honest camper. Despite its rugged appeal it’s actually finished off quite well with nice smooth edges throughout, high quality automotive seals and just a touch of finesse thanks to those fancy pants wine glasses that are included. If you like the cosmetic side of things, this unit might be a little too brute for your taste, but if you want a no-holds-barred camper you can hand down to your grandkids, it’s definitely worth a look.