Here we have the latest coil-sprung NP300 Nissan Navara ST-X Dual Cab, which has been updated for 2017 with improved suspension damping – a key criticism of the previous model.

Nissan has also deleted the sunroof from the standard equipment list and made it a $1000 option instead. And gone from MY17 vehicles are the floor-mounted rear cup holder and the NP300 tailgate badge. 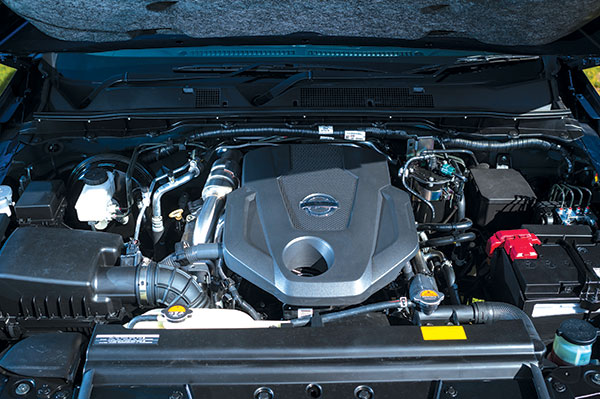 What’s missing from the Navara’s equipment list is trailer sway control, or any of the latest driver-assist systems such as lane departure warning, active cruise control or autonomous emergency braking.

The Navara’s cabin is well laid out and fairly spacious. You’ve got a pretty large 17.7cm infotainment screen, although it can be slow to respond to commands and some of the menu paths are also a bit clunky. The instrument cluster is an easy read and navigating its clear LED trip computer is simple.

The tray has the excellent Utili-Track tie-down system, which provides adjustable-position tie-down points along the interior walls of the tray. There’s also a 12V auxiliary port in the tray.

The Navara’s YS23DDTT 2.3L diesel is intercooled and has twin sequential turbos, the latter perhaps explaining its almost complete absence of turbo lag. The engine’s response off the mark is excellent, with only a momentary delay before revs build up and the Navara takes off. While redline is at 4500rpm, in unladen full-throttle situations the smooth seven-speed auto will upshift at 4200rpm. The Navara performs very well, allowing, for example safe, quick overtaking manoeuvres.

Unladen, the Navara has a firm ride but it absorbs bigger bumps better than many of the leaf-spring utes. Where the Navara doesn’t cope so well is over the type of road that might have been billiard table-smooth when first tarred, but over years of pothole repairs has become patchy with low-amplitude bumps – and there are plenty of such roads in Australia.

Over such surfaces – when unladen, at least – the Navara fidgets, feeling as though it’s a little too firm.

The Navara’s steering is well weighted and it’s a pretty good point A to point B tourer.

The Navara can tow up to 3500kg, but Nissan only allows a maximum of 300kg towball download, instead of the typical 350kg allowance

While some manufacturers offer a 12-pin plug as part of their standard towing package, the Navara’s comes with a seven-pin plug instead. Nissan is not alone here, but it would be good to see more manufacturers following the likes of Ford and Land Rover with a 12-pin setup, given just about all caravanners will want to power a fridge when towing.

With a caravan weighing 2450kg (of which we measured 255kg on the towball) the rear of the Navara dropped a significant 75mm. However, the front rose just 25mm, which is borderline for fitting a weight distribution hitch.

Despite the TBM approaching the maximum permitted for the Navara, the rig was very stable when towing. There was no side-to-side movement and also no pitching. When hitting big bumps – such as a series of undulations, for example – the Navara settled quickly, avoiding the float many vehicles get with a relatively high TBM. Yet just like it was when unladen, the Navara’s ride over low-amplitude bumps was brittle. It got better as speeds rose near 100km/h, but at lower speeds it was at times uncomfortable.

Towing performance was very good, with the Navara holding speed well up hills although engine braking downhill was fair. Fuel consumption reached a high of 16.2L/100km when towing, and a low of 7.5L/100km when driving on the highway unladen.

The exterior mirror shells are curved on the Navara, but securing the towing mirrors onto them wasn’t a problem.

The Navara offers great engine performance when towing or not, and is now much more stable when towing with the new dampers fitted for Model Year 2017. However ride quality over patchy road surfaces is not great, towing or not.