At first glance the Tunland is more or less what you’d find in any other car yard. The design is modern (although appearances are an acquired taste), the panels are straight, paint is deep and glossy, and proportions right. I can only skirt around the fact so long, it doesn’t look like what you’d expect to come out of China. Admittedly, the vehicle we had the keys to had a helping hand aesthetically thanks to a spec sheet listing literally every Tunland factory option available. They’re all quality components too: Toyo tyres, Dynamic wheels, RidePro suspension, VRS winch and a Carry Boy canopy, you’d be forgiven for thinking it was a 4WD shop kit-out rather than a factory package. The full kit also included a quality bullbar, Airflow snorkel, towbar, full VRS recovery kit, floor mats, a bonnet protector and slimline weathershields. It adds a little over $15k to the $30,990 price tag bringing it up to $46,808.92 drive away. For comparison, in most of the traditional utes that would net you a 5yo base model, fresh out of warranty and with an unknown history. The Tunland is starting to make a lot of financial sense.

Lobbing yourself into the driver’s pew gives mixed feelings. On one hand the seats are lined in soft-to-touch leather with perforated seat bases and backs so you don’t get that swamp butt feeling, and the ergonomics are reasonable with no steering wheel off to the side feeling you’d expect from budget offerings either. Then you notice the dash. Now it’s not that the dash is bad. It’s more or less on par with many of the big players, just in their 10-year-old models. The stereo is clunky to operate with minimal features and very basic tech. It’s similar to a 70 Series ’Cruiser in that regard, some will love it, some will hate it. There’s also noticeable creaks, rattles, and vibrations throughout the interior. Nothing drastic, just not what you expect in a vehicle with 1000km on the clock. 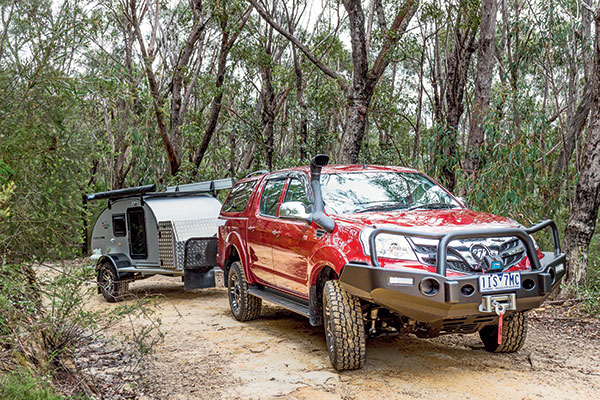 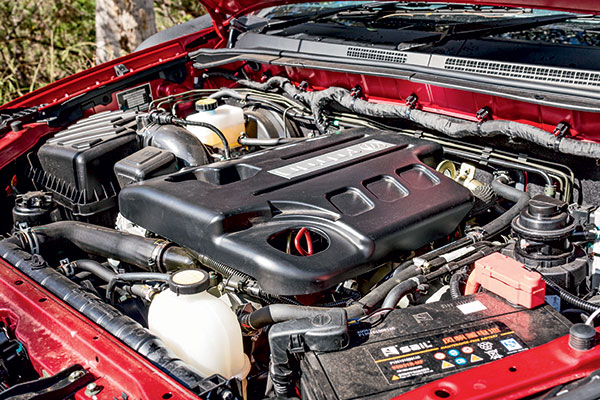 Under the bonnet and initial impressions of the Tunland are a lot more positive. There’s a Cummins 2.8L turbodiesel mated to a Getrag gearbox, BorgWarner transfer case and Dana diffs. If those names don’t mean anything to you just know they’re some of the biggest names in American and German automotive manufacturing, although these components are built in China under license.

THE THICK OF IT

Like most modern dual-cab utes, the Tunland uses a combination of double wishbone independent front suspension with a leaf-sprung live axle rear. There’s no diff locks or clever traction control systems that give it an advantage offroad but the fundamentals are sound and proven. Four wheel drive operation is push button with 2H-4H being available on the fly, like most 4WDs you will need to stop and select neutral to shift into 4L. The buttons don’t stay depressed or light up when selected so you sort of just have to trust they’ve worked and wait for the symbols to show up on the dash when you start moving. It’s unnerving when you’re used to some sort of feedback but you quickly adjust. The hubs are auto-locking too so you don’t need to jump in and out of the cab to change what mode you’re in. A Dana LSD rear does provide more traction on muddy tracks and soft sand but will still lose drive if you lift a wheel.

BUT DOES IT TOW

See, here’s the thing about towing. Before being able to tow, first you have to be able to hook the camper up. That bulbous rear bumper I mentioned before? It partially covers the tow-ball, making it impossible to hitch the trailer. To get around the problem we had to source an extended towbar which not only applies more leverage on the rear of the ute but also made it impossible to connect the trailer wiring requiring a patch lead to make things reach. If you owned one yourself it’s almost a non-issue, ditch the bar and go on with your day, in a loaner though it does make things difficult.

With that sorted the Tunland towed surprisingly well. The Cummins engine provides plenty of grunt from down low and doesn’t have the huge turbo-lag issues many small capacity turbo diesels have. It chugs along at low rpm gradually building power as the revs pick up. The Tunland is rated to a maximum tow capacity of 2500kg braked and would easily cope with that amount of weight in terms of power.

On the road the steering does require constant input much like older dual cabs, a curse of the traditional hydraulic assisted steering rack where many others have gone to electronic. Some will love it, some will hate it. Our test vehicle was fitted with the optional 300kg rear springs so had no issues dealing with tow-ball weight but still provided a decent ride. The rear axle is also fitted with disc brakes (the only other utes with disc brakes are the VW Amarok and Great Wall Stead) so had no issues pulling up the weight of a laden trailer even winding our way down Victoria Pass.

A lot of late model 4WDs are a purely emotive purchase. People buy them because they like the colours, or the styling, or the options. Choosing one over the other because it has a sunroof or a flappy paddle gearbox. The Tunland isn’t really one of those utes. You’re not going to fall in love with it at first sight, or scream from the roof tops that it’s the best ute on the market and everyone else bought the wrong one. But it is a bloody good foundation for the price you pay and comes backed with a 3 year 100,000km warranty with 3 years road-side assistance. You can’t sugar-coat the fact it’s not on par with the traditional offerings in terms of fit and finish, NVH, and styling, but are the others $30,000 better? I don’t think so.