Maths, diagnosing a problem with a computer-controlled car and hearing the phrase ‘it’s fine’: all of these things are incredibly complicated and enough to turn most people into a quivering mess trying to understand what’s going on. Now we can add towing legalities to that list as well.

You see, not that long ago, toeing capacities were all so low they were pretty easy to understand. If you had a braked towing capacity of 1800kg, you could damn near always get a trailer weighing 1800kg and hitch it to the back of your tow rig. Provided, of course, that it had its own set of brakes and wasn’t freeloading off yours.

Nowadays, things are a touch more… complicated (for lack of a better, suitably PG-rated, word.) With the transition from big Aussie V8s to twin-cab diesel utes as the staple family car and increasingly more expensive fuel costs, horsepower has been replaced with towing capacity and fuel economy as the go-to buzzword for marketers trying to get you to buy their 4WD over the other guys. The whole lot has left things not entirely dishonest, but complicated enough that you basically need an instruction manual to read your instruction manual. Still following? 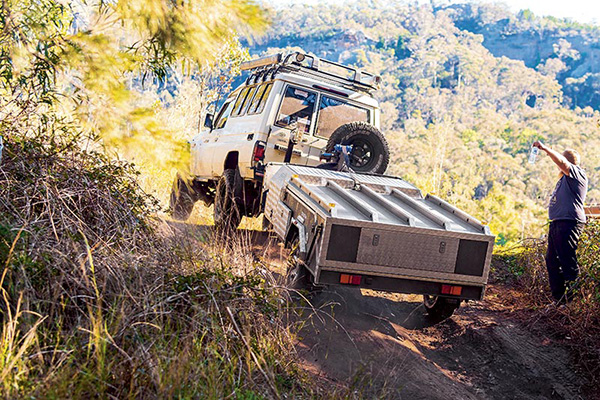 Yes, your new Ford Ranger can tow a trailer weighing 3500kg, but not in any practical way. The problem is that manufacturers want to sell vehicles, not educate their customers. It’s a bit like saying you can live the rest of your life underwater if you really want to. I mean, technically it’s right, but you’re not going to like the fine print on that either.

The reality is that most modern 4WDs are pushing their luck on the weight front as it is, making the tow rating – or braked towing capacity – more or less irrelevant. The problem comes from all the other weight classifications, and this issue plagues literally every model on the market. Very rarely will a vehicle be legally allowed to tow fully laden (see GVM, left) to its full rated towing capacity (see braked towball capacity, left) due to the constraints imposed by its gross combined mass (see GCM, left). In most cases, every 100kg you add to the tow rig will mean 100kg less you can actually tow. By the time you add the standard accessories that come with this territory, you might find your 3500kg tow rating has actually been dropped down to 2500kg.

WHAT THIS MEANS FOR YOU

So how do you know if your trailer is legal to tow behind your tow rig? It’s complicated, and something no one can give you an answer for without seeing your exact setup.

The first step is to ensure it’s rated to carry the weight in the first place. Weigh your tow rig in full touring regalia to see how much you’re eating into your GCM, and make sure you don’t forget passengers and a fridge full of food. From here, double check if your trailer’s ATM is low enough to keep you under your GCM. From there you’ll need to find your trailer’s towball mass (TBM) and check that against the maximum rating of your towbar and towball or coupling. Once you’ve done that and everything looks good, you’ll need to weigh your individual axles of your tow-rig with the trailer hitched on to make sure that you’re still under your GVM and the front and rear axle loads haven’t been breached. It sounds complicated but can basically be broken up into: is the vehicle too heavy, is there enough wiggle room left over for the trailer, and is everything rated for the weights they’re actually carrying?

Unfortunately, there’s a big difference between what is considered legal, and what should be considered safe. For the last 100 years or so, the rule of thumb has been that the trailer should weigh no more than around 80 per cent of the vehicle’s unladen weight, up to a maximum of 1:1 if the driver really knows what they’re doing.

In fact, in varying figures, the 80 per cent guide is actually law in parts of Europe, but down here in the land of the long regulatory rule book it’s, ironically, a bit more of a free for all.

The logic of the 80 per cent rule is that the trailer weighing less than the tow vehicle means it won’t be able to muscle the car around on the road. Dangerous side winds, emergency braking and fast cornering won’t see the trailer physically pushing the tow-rig around causing it to lose control or for the trailer to begin swaying. The 80 per cent rule would see the Ford Ranger’s tow rating drop from 3500kg to somewhere around the 1500kg mark.

Anything more than 750kg requires its own brakes; this is most easily achieved with override brakes although they do have their issues. They’ll slow you down in a straight line and can proportionately brake so are fine for running around town, but their lack of control from in-cab makes them less useful in offroad situations and a real pain, in that you need to jump out and lock the pin every time you reverse. For trailers more than 2000kg, stand-alone brakes that can be manually controlled from inside the tow vehicle are required. There are a few different systems available but the most common you’ll come across will be electronically controlled. Some high-end units can adjust braking input proportional to the tow vehicle and all should allow you to manually operate the brakes helping in steep terrain.

THE DEVIL’S IN THE DETAILS

As with most things in life, the devil is in the details. The right trailer, behind the right tow-rig, with the right weights can still be illegal because of a few overlooked aspects that are worth keeping an eye on. Even if everything else along the way seems fine, you can run into issues with the weight rating of other items. Towbars, towballs, axle loads, even your tow-rig’s tyres are all often forgotten completely when working out what you can legally tow but are, arguably, more important than just about every other component combined. You’ll also need to consider how the weight you’re towing will affect the speeds you can drive, too. Some vehicles have an automatic speed reduction when towing certain weights, even if the trailer is braked. Knowing if your tow-rig is not only legal, but also safe is a minefield and is entirely dependent on your exact setup.

If you’re good with numbers it’s worth running through it all before your next offroad adventure, otherwise take the time to place a call to a driver trainer who specialises in towing trailers offroad.

WHAT THE NUMBERS MEAN

Probably the most recognised figure, GVM is the absolute most your tow-rig can legally weigh. It includes every bit of luggage, accessories and passengers as well. If you’re at GVM already and stop off for a sneaky meat pie it could be enough to push you into illegal territory.

A little like GVM, Gross Combined Mass takes into account your trailer not just your tow-rig. Things like water in your trailer’s water tank and gas bottles on the drawbar will all eat into your GCM. This is one to watch.

Otherwise known as Kerb Weight, Tare Mass is the weight of your tow-rig ready for road completely unladen. It excludes passengers or any accessories and manufacturers may exclude fuel in the figure.

The maximum amount of load that’s able to be positioned above each axle in your tow-rig. In some vehicles, this can be half the GVM, others will have a little higher rating on the rear axle to give flexibility when towing.

The maximum amount of load that’s able to be positioned above each axle in your tow-rig. In some vehicles, this can be half the GVM, others will have a little higher rating on the rear axle to give flexibility when towing.

The maximum legal weight your tow-rig can pull when the trailer has its own brakes. This is the major selling point for most modern 4WDs; although without trailer brakes everything has the same rating of 750kg.

How much weight you can include in your tow-rig. It’s basically your GVM minus your Tare weight. Passengers, bull bars and winches, canopies, even heavier tyres will all eat into your payload and need to be accounted for.

The weight your camper trailer asserts onto the vehicles tow-ball or hitch. This is a dynamic  weight so will change as you reposition gear in your trailer but a safe rule is 10 per cent of the trailer’s weight. This does count towards the tow-rig’s GVM and Payload.

The weight your trailer asserts on its own wheels and tyres when fully loaded. This doesn’t include the weight pushing down on the towball but will include any gear you load in the trailer, including some optional accessories.

The maximum legal weight of the trailer including a tinny on the top, a full water tank and a few novelty inflatable pool toys shoved under the mattress.

Just like the tow vehicle, a trailer’s Tare Mass is its empty road legal weight. It’ll include anything that normally lives in the trailer like a mattress, gas fittings, kitchen and so on. But won’t include ‘wet’ accessories like gas bottles, jerry cans or drinking water.

Check out the full feature in issue #108 of Camper Trailer Australia magazine. Subscribe today for all the latest camper trailer news, reviews and travel inspiration.