Back from Gulf Country

I’ve spent more than half my life touring this wonderful country, usually trying to disguise it as work and getting someone else to cover the fuel. Funny thing is, as soon as I get home, all anxious to crash on the couch or find the mower or whatever, the family’s usually pushing me to take them bush too!

Years ago, when the kids were little, my long-suffering wife figured the ‘bubbies’ would be better protected from the elements if we had a caravan. Growing families cost a bit, as I’m sure you know, and I never was the sort of bloke to do things the easy way so I figured I’d build my own van.

It wound up being a huge project that took almost four years to finish. Starting with a 1962 single-axle Viscount we built a full chassis, equipped it with Al-Ko offroad suspension, welded the old Viscount box on top of that and began a process of ‘updating it’ with everything from a hot water service to an innerspring mattresses. It had solar, extra water tanks, an external shower and brand new silicone on all the corners to seal it up after I’d finished banging. 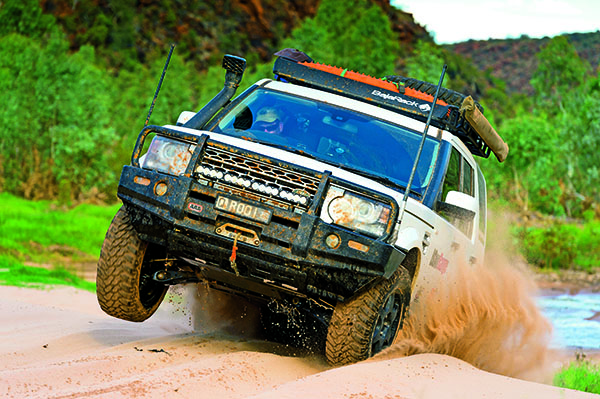 And by the time I’d finished it we only had a couple of years before all three kids were too big to use it without mum and dad sleeping outside in swags. Yep, I’ve been scoring points with the wife ever since.

Take last week, for example. I’ve just returned from a big outback trip filming DVDs for LowRange that saw us duck right up the centre country and come home via the Gulf. It was an incredible trip and I’m still trying to adjust to being home again. That’s usually the big problem, remembering that there’s a whole different set of chores to get through back here and it’s not just about keeping an eye on the fluid levels under the bonnet and the morning restock of the fridge.

This time I came back and had troubles finding the house. Yep, the mower tractor had chucked a belt the weekend before I left and the sons had been warned off using it until dad could fix it up. Beauty, except five weeks of Queensland sunshine on top of some huge rains meant the old home paddock was looking more like sugar cane before the harvest.

It had been mentioned when I came into phone range sometime during the middle of the trip, but my suggestion to dig up the old Victa and get a few acres worth of a workout was met with something that sounded awfully like, “So... you think I’m fat?”

Every fella knows there’s no safe answer to that. Admit defeat and crumple up some chip packets into the mouthpiece of the phone as you move it away from your mouth and say, “What’s that? You’re breaking up...”

It works almost every time, unless she knows which pub you’re in. In that case, you’d better have bribed the barmaid or you’ll be hung out to dry. I thought I was getting away with it for years until Dorelle, barmaid to the stars down at the Mudflats Hotel, admitted to Chalkie White that she’d taken up playing bingo at the Rissole Club’s mid-week bash. Boy, you could have heard a ball drop when she said that. Maybe a few balls...

Trouble is, us blokes know this bingo caper is all about the ladies having a good old gossip. Now, it’s not that we think we’re big time or anything but usually when the girls have a goss, it’s about their blokes.

Yep, Dorelle’s got the keys to many a man’s secrets and maybe a few ‘G and Ts’ at the Rissole could loosen those locks. Me? Completely innocent, of course. Except for last Saturday when I spent the whole day ‘looking for mower parts’ in the vicinity of the dartboard. And maybe Friday night, when I was working with the Salvation Army. Technically, putting a few bob in old Jimbo’s Sally box is working with them, isn’t it? It might not come across that way though, especially after waking up in the shed because I couldn’t find the house.

Which brings me back to fixing this mower. The parts are ordered now, the belt is already here and I’ve sharpened up the blades ready to put her back together. I don’t want anyone thinking I’m shirking duties here on the home front, just so I can go gallivanting all over the country!

Wish I could remember how this belt goes, though. Is it around two pulleys and back through the clutch or once around each and then back? Hmmm, I bet Chooka Morris would know. He used to mow lawns professionally once, until that incident at the ‘Gnome House’, anyway. Heck, I’d have trouble telling a bunch of garden gnomes from a regular lawn myself. Big clean up job. Two hundred and forty seven decapitated gnomes.