With its elaborately branched gorges and sandstone cliffs rising like battlements up to 100m high on its eastern side, Western Australia’s Kennedy Ranges are indeed a formidable sight. As an increasing number of visitors to this remote national park are finding, the majestic eroded landscape combines spectacular cliffs and gorges, eerie canyons, ancient marine fossils, strange honeycomb formations, an array of colourful gemstones and an extensive Aboriginal history.

Pushed up from an ancient seabed in the remote interior of Western Australia's northwest, the Kennedys have dominated the surrounding plains for thousands of years. This stark, beautiful rugged eroded plateau, some 800km north of Perth and 160km east of Carnarvon, runs in a north-south direction from the outback outpost of Gascoyne Junction. 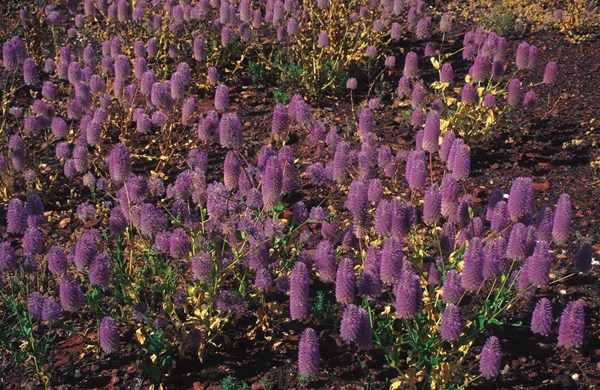 Rugged outback territory, the Kennedy Range National Park is no Sunday drive unless you hail from Gascoyne Junction or a nearby pastoral station. It's harsh, hot and dry, requiring care and preparation if you plan to venture it.

Access to the well-developed eastern side of the park is via a well-maintained gravel road north from Gascoyne Junction which has splendidly recovered from floods in 2010. The town has a beaut new roadhouse and a modern caravan park with ensuite options, a great campers’ kitchen and cabin accommodation available.

On the northern outskirts of town, the road crosses the formidable Gascoyne River. If you are looking for a nice picnic spot around here, you'll find a few good options. A few hundred meters from town is Hackers Hectare, a signposted picnic area with no camping on the southern banks of the river. A much nicer picnic spot is 3km from town on the northern shores of a beautiful large permanent waterhole in the river – a lovely spot to stop for a cuppa with camping available further along this splendid river bank, although there are no facilities provided apart from an information shelter.

Another pleasant spot to break is 43km north of the Gascoyne River where the road crosses the causeway Lyons River. The turn-off to the Kennedy Range is 3.5km further. The road north from Gascoyne Junction runs parallel to the range where its flat-top, eroded outline emerges from the west. Other small pillar-like breakaways populate the landscape to the east, south of the Lyons River.

On reaching the signposted turn in to the Kennedy Ranges, the generally well-maintained track heads west for approximately 12km before reaching the base of the range. As you approach the mesa, its rough, somewhat eerie forms slowly emerge. The mass of craggy white-orange and dark brown cliffs and gorges eat into the range and stand tall upon the surrounding plain— it is impressive indeed!

CAMPING UNDER THE CLIFFS

Four main parking areas lay at the cliffs’ base, with the first, Temple Gorge day visitors’ car park, at the end of the main track leading into the range. Pit toilets are provided at the parking areas, with one designated camping area, Temple Gorge Campground offers toilets and a few tables and chairs – camp hosts are located here during the peak season from June to September. Campfires are not permitted within the Park apart from a communal campfire and barbecue plate controlled by the camp host, so bring a gas/fuel stove and sufficient water, fuel and supplies.

The well spaced out campsites, some of which have part shade, are set beneath the towering cliffs of the range and are really quite special. During the peak winter season, camp hosts will often light up the fire for a communal Happy Hour late in the day.

Schedule a few days to enjoy the Kennedy Ranges. If you're reasonably fit, many canyons and gorges including Honeycomb, Temple and Drapers are worth exploring in this eastern section. The views from the top of the gorges on the escarpment walk trail are worth the effort. The camp hosts, at the daily Happy Hour gathering, present certificates to those who successfully conquer the demanding trail.

Remember, the slopes are unstable and extreme care is required.

The 'sunrise view' offers great vistas north of the main gorge via a 150m walk/climb from a car park. Travellers who successfully drag themselves from their sleeping bags are well rewarded with a truly wonderful and very colourful view right along this eastern escarpment.

Huge marine fossils harking to the area's seabed beginnings and sections of what appears to be extruded lave are found in several gorges. Also quite remarkable are the strange lacy patterns fabled as 'Egyptian writing' that are sometimes shaped into honeycomb formations worn into the sandstone cliffs. In some spots, local birds find them ideal as nesting boxes.

On top of the range is a vast plateau of ancient dune fields. Here, seemingly endless rows of dry, waterless red sand dunes dominated by spinifex and small shrubs are an eerie sight high up on top of this ancient escarpment. It is estimated these dunes, measuring up to 18m high and 100m or more apart, were formed about 15,000 years ago during the last major arid period over this part of the continent. Today, they support many plants species including wattles, grevilleas, bottlebrush and an occasional banksia.

Within the gorges, you'll find pools of water and evidence of seasonal waterfalls gouged into the rock faces. Out here it rarely rains – an annual average of only 210mm. But when it does, especially from cyclonic depressions, the vertical cliffs and steep valleys must be a sight to behold. Huge volumes of water pour down from the mountain's catchment areas and are funnelled into narrow, raging torrents which race to the bottom and are dispersed over the surrounding countryside.

A good pair of walking boots is advisable for walking and climbing here, particularly over the crumbly sandstone and ironstone rocks. Allow plenty of time and bring your own drinking water. Drive trails lead to the three main gorges, or you can walk to each of them from the campground.

For visitors seeking a more relaxed visit, the scenic vista from your campsite or from the various short drive tails have much to offer. Just put your feet up and take it all in during the day and at night enjoy the wonderful clear starry sky and maybe watch a satellite or two pass overhead – just wonderful!

Hikers will often spot semi-precious gemstones and petrified wood in the valleys and slopes of the range. Chalcedony and opalite are commonly found but fossicking and collecting rocks, gemstones or fossils is not permitted. On the western side of the range, ongoing mining operations extract mookaite (a type of jasper and used in jewellery) at the base of the Kennedy outcrop. This is the only known place in the world where mookaite can be found.

Large varieties of flora and fauna are also unexpected bonuses. On first glance, you would think the Kennedys would have little of either. Like many arid areas of Australia that has a highly variable rainfall, the flora and fauna patterns also vary depending on seasonal conditions.

More than 100 species of birds (including wedge-tailed eagles and spinifex pigeons) are identified, as well as 20 species of mammals (including euros, rock wallabies, bats and dunnarts) and 33 species of reptiles.

Adding further colour to this outback landscape are around 400 different plants, including 82 blooming wildflowers, usually at their peak in August and September, which can be found in and around the range. The best springtime floral displays are those that follow good rains in late summer and early to mid autumn.

The Kennedy Range extends around 75km in a north-south direction and is between 12km and 25km wide. The national park, gazetted on 8 January, 1993, originally covered an area of 141,660 hectares. This has increased to almost 320,000 hectares with the recent purchase of additional areas from local station properties surrounding the Park’s existing boundaries. Whilst the development of facilities at the Kennedys is still in early stages, this fascinating place in WA's outback is now being discovered by an increasing number of travellers each year. As time goes on, its reputation as a place of real wilderness value is certain to attract even more attention. The Kennedys are a truly remarkable spot hidden away in the remote WA outback.

There is little recorded history of Aboriginal occupation in the Kennedys, or Mandatharra, thoughsites within and around the range suggest it occurred. The formidable geological structure is thought to have separated two local tribes – the Maia to the west and the Malgaru to the east. The freshwater springs on the western slopes would have been a good source of food and water, with many artefacts dating back as far back as 20,000 years.

The surveys that have been carried out in and around the Kennedys revealed more than 100 ancient Aboriginal sites in the area. Most are archaeological sites, with many believed to be ceremonial or mythological significance. Some very old rock art engravings (petroglyphs) can still be found by walkers with a keen eye in Drapers Gorge. These, however, are heavily weathered and difficult to decipher.

European involvement here did not take place until 1858 when an expedition led by Francis Thomas Gregory discovered the Kennedy Ranges on 12 May, 1858. It was subsequently named in honour of the then Governor of WA, Arthur Edward Kennedy. Within 20 years of this expedition, pastoralists were taking advantage of the local springs and waterholes like the Aboriginal inhabitants before them, and the erratically flowing Lyons and Gascoyne rivers. The region in the late 1800s and early 1900s went on to become a prosperous wool producing area and today both sheep and cattle properties are seen right throughout the district. 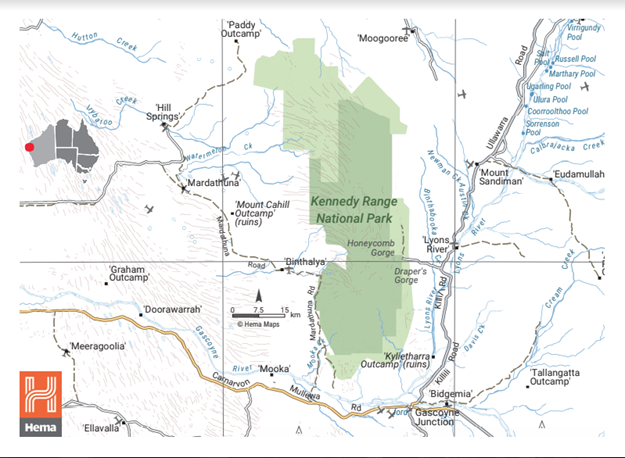 The track across the top of the range is sandy and quite rough in sections and subject to windblown sand and closure. Phone Parks and Wildlife in Carnarvon on (08) 9941 3754 for track conditions .

Check out the full feature in issue #128 of Camper Trailer Australia magazine. Subscribe today for all the latest camper trailer news, reviews and travel inspiration!