While there are plenty of camping options that are easily reached from major roads, some of the true gems, such as the Blue Waterholes in NSW’s Kosciuszko National Park, require a more serious effort to access.

Blue Waterholes is located to the east of the Snowy Mountains Highway, between Talbingo and Kiandra. The roads in and out are gravel but are generally not too difficult and can be successfully tackled by 2WD vehicles in dry weather. However, 4WD would definitely be needed in wet weather, especially for the drive out which involves a few steep sections. In winter the track is closed, usually from June to October, but this may be extended depending on snowfall. Check the road conditions before setting out.

To reach your destination take the turn-off onto Long Plain Road and you enter a very different world, as the trail makes its way along part of the lengthy Coolemon Plain, a 700km² spread of virtually treeless expanse created by the pooling of cold air which inhibits tree growth. In the warmer months, the plains are covered in wildflowers. This is an area where there are many camping opportunities, but none can rival Blue Waterholes. 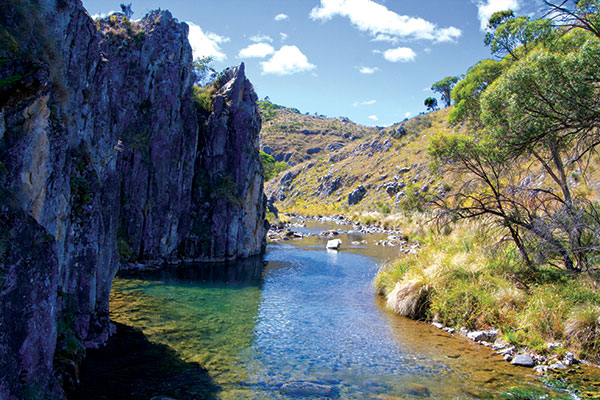 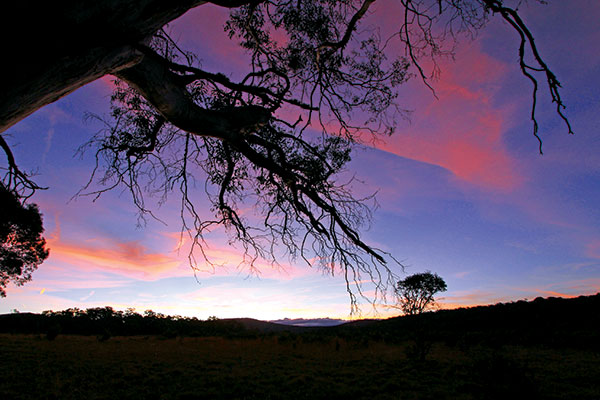 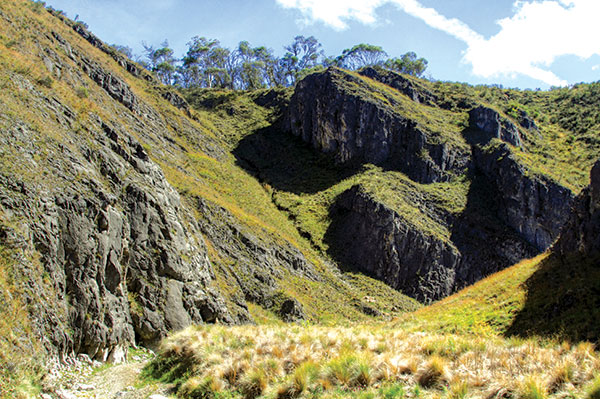 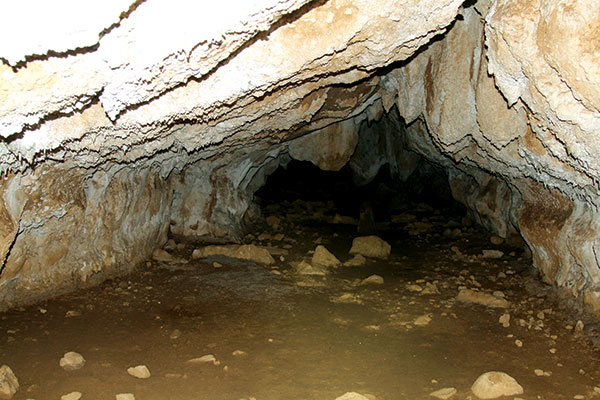 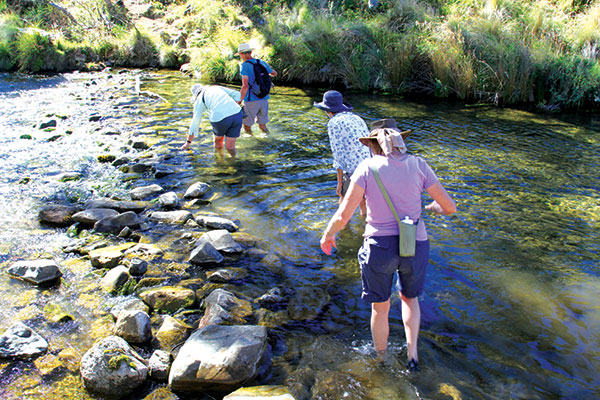 To reach your destination, turn off Long Plain Road after about 20km and follow Blue Waterholes Trail to its end, about 5km further on. This lies at the bottom of a long downhill drop, near the bottom of a valley created by Cave Creek. There are two camping areas, and no reservation system so it’s first in, first served. In summer, these areas can become crowded so be prepared to set up camp in one of the available areas just before the final drop down to the Blue Waterholes area.

On the way in, you will cross the upper reaches of the Murrumbidgee River — one of Australia’s great rivers — just over a kilometre from its source.

The campground has basic facilities such as composting toilets and fireplaces, but you must bring your own drinking water and firewood.

There are a number of activities available around the Blue Waterholes area which can easily fill your days. The most significant are the two walking trails that take in Clarke’s Gorge and Nichols Gorge. The former requires a number of stream crossings, but the water is generally shallow, if cold, and some scrambling along narrow footways through quite a narrow and deep gorge. It’s a dead-end track that’s about a 4km round trip, but at its end is the spectacular Coolamon Waterfall.

The latter walk runs from the Blue Waterhole — coloured by the dissolved lime in the water — below the lower camping area to the south, along another deep gorge. This passes several limestone caves which are open to individual exploration, with a number of explanatory panels along the way. Make sure you take a torch with you to enjoy the caves. It’s a 7km-long walk which comes out the back of the upper camping area.

Both walks require moderate fitness. The climb up out of the Nichols Gorge walk can be strenuous, but the biggest risk is the likelihood of coming across a snake, so it's best to keep an eye out, and you should be okay.

Aside from snakes, the whole area exhibits plenty of wildlife. From the wild horses of Man from Snowy River fame to kangaroos, lizards, wallabies, platypus, possums, wombats and rabbits — all can be seen around the area, especially at sunset. Take care of the wild brumbies and do not approach or try to feed them, and keep your food locked away when you aren’t immediately nearby. They will come into the campground at night so take care.

Swimming would be okay at high summer but at any other time of the year the crystal clear water, which bubbles up out of the springs at Blue Waterhole, would be too cold. The water does warm up as it travels downstream, so away from the spring at the Blue Waterhole, will be more tolerable.

If you are into fishing, the streams here do contain both introduced and native trout.

The neighbourhood also shows a number of remaining structures from late 19th Century and early 20th Century pastoral activities. These are mostly restored and give a good idea of the sort of existence endured by these hardy pioneers, with the Coolamine Homestead and outbuildings, built in the 1890s, within easy walking distance back along the entry track from the campground.

Travelling further afield can take you to other camping areas, some of which include horse yards for those who wish to enjoy the outdoors with their own horses. You can drive to Tantangara Dam and its causeway crossing (sometimes closed by high water) or you can go further afield to Yarrangobilly Caves (about 2km along the Snowy Mountains Highway from Long Plain Road) with its well developed suite of limestone caves, accommodation facilities and its thermal pool which produces a continual flow of water at 270C, making it a favourite picnic spot all year round (beware of the long and steep walk in and out).

Further out are the many dams and structures of the Snowy Hydro Electric Scheme and the other sites of one of Australia’s great wilderness tourist destinations. Alternatively, you could head south to Kiandra, Australia’s highest gold mining town.

If you can’t spend a week filled with activity at Blue Waterholes then you are a jaded camper indeed. This is a remote bush camping site filled with natural wonders, from the crystal clear night skies to the pristine bushland and the rugged gorges. It’s well worth the effort.