Camp ovens are a ubiquitous component of any Australian camper’s setup, and rightly so. There are few things better at the end of a relaxing day than settling down to a great baked dinner with a few friends, or taking a break in the middle of the afternoon to enjoy some still-warm damper drizzled with golden syrup or topped by creamy butter.

Getting hungry already? Then read on.

Camp ovens are a time-honoured method of cooking. There are records of iron cooking pots with lids, pretty much as we know them today, going back centuries. Camp ovens were a standard piece of equipment for early Australian explorers, cattle drovers and bush settlers and they are still as useful and still producing uniquely enjoyable food today. 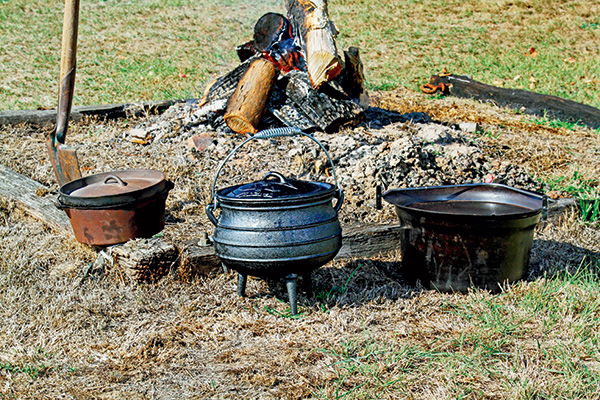 Walk around any bush camp area and you’ll see at least one, if not dozens of, flat-bottomed, cast iron camp ovens. Generally, they do a great job and are sold by most camping outlets. Cast iron camp ovens are are usually sold according to their volume, measured in the old scale of quarts, and come in sizes ranging from 2qt to 12qt (1.8L to 11.5L). Their sizes usually vary from 26cm in diameter x 11cm deep to 45cm in diameter x 23cm deep. Prices range from around $30 to $150, though you can pay more for some Australian-made ovens.

Your choice will be governed by what you cook and how many you want to cook for. Keep in mind that these are relatively heavy, so large ovens will be hefty to manoeuvre around hot coals and fires and to transport from camp to camp.

There are several features to look out for when buying one of these camp ovens. The lid should have a good lip around the top, to assist in retaining coals and prevent ash from falling over into the meal whenever it is removed for inspection or rotation of the contents. It should also have a positive seal, so that it locates back on top easily and firmly without causing a rocking motion, to avoid heat and moisture escaping from the interior while cooking. A coiled wire bail handle is best as it minimises the transfer of heat, allowing you to handle it when the oven is hot with less chance of burning your hand.

The walls and base should be reasonably thick, for even heat distribution, and the inner walls should be free of metal ‘dags’ or lumps, which will make cleaning a problem; a smoother surface will be easier to clean.

The shortcomings of these types of ovens are that they are brittle and will crack if dropped on to a hard surface, such as a stone, or can crack if cold water is added to them when hot.

Cast iron camp ovens, however, are the physically smallest per content size of the three types under review, and their mass means that they will retain heat well in cold or windy conditions and help distribute it more evenly.

There are several theories on whether or not these ovens should have legs. Those who favour the legs claim they permit oxygen to reach the coals underneath to provide better heat. Some feel they just get in the way and you are better off with the oven sitting flat on a bed of coals. Our experience is that there is something to be said for either side and that this, really, is a matter of personal preference.

Some ovens come with small lips or protrusions on the lid, which are designed to permit you to stack your ovens, with the coals on the lid heating the bottom of an oven above. This can be a handy option if you cook large meals so that you can have, for example, a large joint of meat in one oven and vegetables in another, and maybe dessert in a third oven on top. But for many, the management of this many ovens by one person becomes a full-time job and there’s little time for socialising while it’s being done.

Hillbilly is an Australian brand which produces a wide range of camp cooking items in blue steel, including excellent spun steel camp ovens.

They come in two sizes – 12.5L and 7.5L – and are much lighter than a cast iron oven. The 12.5L Hillbilly weighs 4.5kg, compared to around 15kg for a similar capacity cast iron camp oven. If you do need two ovens, the smaller one fits neatly inside the larger.

Because they’re spun steel, their surface isn’t porous, making them much easier to keep clean. These spun steel ovens won’t crack if dropped or crack if you put cold water into them while hot, either. They are physically larger than an equivalent-sized cast iron oven – 415x210mm for the 12.5L Hillbilly version compared with 380x165mm for a similar capacity cast iron model. As there is less mass in the metal, retaining and distributing heat around the oven is a little more critical but you can get used to that.

The lid can be used as a frypan, using the removable handle to shift it about. Hillbilly makes an excellent range of optional extras. Its BushRanger kit includes a stainless steel trivet, a vegie ring, a height extension ring, a pot stand and a canvas carry bag, priced, including the oven, lid and carry handle, at $260. Any or all of these items are available separately.

Hillbilly also manufactures a KingCooker gas ring freeing you from a dependence on firewood and coals, for example, in a caravan park where fires are usually discouraged or banned.

All up these are highly recommended.

OZtrail recently introduced the Potjie Pot (pronounced ‘pot-chee’) to the Australian camping scene. The concept arrived from South Africa, evolving from Dutch ovens used by early settlers. It has three tall legs for standing over hot coals. The 8L volume and raised round bottom make it ideal for curries or stews, though there are many other recipes available for it.

The cast iron pot is heavy at 10kg and at 230mm wide and 280mm high, it is larger than most camp ovens but it comes with a wooden carry box.

The OZtrail Potjie Pot is pre-seasoned requiring only a warm water wash prior to first-time use. Potjie pots are designed for potjiekos, which employ a South African style of cooking, where meats and vegetables cook slowly by steam, with little stirring, so each item retains its own texture and taste. We’ve used ours to cook damper and desserts so it is really as versatile as your imagination.

All camp ovens must be seasoned, to seal the porous surface and effectively make it as close to non-stick as possible.

To season your camp oven, wash it out thoroughly with warm water, without soap to avoid leaving a residue in the metal pores that will affect taste of your meal, then leave it out to dry (or place over low heat for about an hour). When fully dry and able to be handled, wipe over the interior of the oven and lid with a vegetable oil, such as olive or peanut oil. Remove any excess oil and place it into an oven for an hour on maximum heat.

After each use, renew the oil coating after cleaning out all signs of food. If food cannot be removed by wiping it out, add water (not hot to a cold oven or cold to a hot oven) and bring to the boil. Once clean, dry promptly and re-oil to prevent the formation of rust.

If you ever burn a meal and have to scrub out the interior with steel wool or a wire brush to get it clean, simply repeat the above process to renew its surface.

The full feature appeared in Camper Trailer Australia #107 2016. Subscribe today for the latest caravan reviews and news every month!