Everybody has a favourite place. Whether it be your childhood holiday haunt or your favourite 4WD tracks. Today I am going to share mine with you. People come from all over the world just to visit my favourite place, to (quite literally) cover the rocky outcrop with their blood, sweat and tears. My favourite place is Mount Arapiles, in northwest Victoria.

Driving here from Melbourne, across the vast flat Wimmera plains,you would scarcely know you were heading to a rock climbing destination. For hours and hours green fields filled with sheep blur past your windows, and the only clue comes upon you suddenly,when the mountains of the Grampians rise from the plain on your left. The Grampians themselves are a worthy destination, offering a rich variety of 4WDing, walking and climbing, but if you want to try your hand at rock climbing, Arapiles, a half hour or further on, should be your goal.

A left turn at Horsham sees you come to the quaint town of Natimuk,populated by a colourful collection of climbers and country folk.Here you will find a pub, a general store, a cafe, an art gallery,and a climbing gear shop - which is where you will want to head if you are interested in booking a guide to safely introduce you to the rock.

From Natimuk you can see Arapiles in the distance. It doesn't quite loom, it's a little too squat for that, but arrive at sunrise and it will greet you with a glowing orange face. It's just a short drive down the road to get to the Parks Victoria campground at the base of the mountain. Here you will find the sites are on a slight slope, and are equipped with toilets (one block of long drop and done flushing) and bore water. Climbers are a notoriously skinflint bunch, so camping costs just $2/person/night.

There are many walking tracks that wind their way through the boulders scattered at the base of the cliffs, as well as some that ascend through the gullies to spit you out on top of the mountain.You can also drive up there. If you do, make sure you stop at the car park halfway up and do the short walk to Bushranger Bluff. Here you will find a small cliff with a large cave three quarters of the way up, known as Melville's Cave. This is supposedly where Victorian bushranger 'Captain' Melville used to stash his treasures in the 1850s; it is an easy scramble up to sit in the cave for brave kids.

There is a nature walk around the mount, which supposedly has agreat spring wildflower display, but I have to admit that I have not yet had time to walk it yet.

When I visit Arapiles I spend my time, from daybreak to dusk,climbing up the fantastic orange rock. From a rockclimber's perspective Mount Arapiles has a magic combination of features that make it the best place to climb in Australia (some would argue in the entire world). The quartzite sandstone, formed from regular sandstone that has been subjected to intense tectonic pressure, is remarkably strong - reducing the chance the rock will break off(taking you with it).

Best of all, there are many climbs that are remarkably easy, yet taller than 100m, making a spectacular introduction to the sport for beginners. Best of all, the cliffs are just a short walk from camp, and there is a massive concentration of climbs within the one relatively small area (epic hikes to climbs are fun, but best avoided).

You don't need to go for a climb to make a visit to Arapiles worthwhile, but until you sit sweaty on top of the cliff and survey the plains with weary eyes - see the eagles soaring past and falcons swooping out from the rock - you won't really understand why so many people think this is such an amazing place.

Rock climbing is inherently dangerous, so I recommend hiring a guide if it is your first time at the mount. They will provide you with all the equipment and knowledge you need to climb safely.

Arapiles is just a short drive away from the Grampians National Park, Little Desert and Big Desert, while also being just a shorthop off the Melbourne to Adelaide inland route.

For those who want more salubrious accommodation there is a caravan park located just out of Natimuk, and a short drive away from the mount.

In recent years a lot of effort has gone into revegetating Arapiles with native flora, so hopefully you will not only enjoy it, but do your best to look after it. 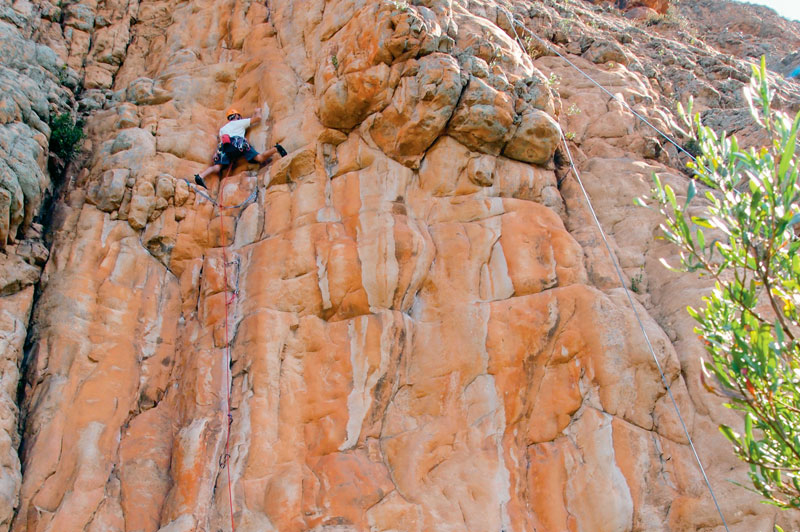