Cruisemaster reinvent the DO35 hitch

At Camper Trailer of the Year at Mt Warning, out of 25 trailers under consideration, 14 came equipped standard with Vehicle Components’ Hitchmaster DO35 hitch, including every single camper in the Hybrid and over $45,000 categories, and a number of others offered them as an optional fitting. Given the range of possible trailer couplings on the market at the moment, one had to ask, why this market dominance?

The DO35 hitch has recently been released in its third iteration, a surprising development since it was already by far the single most popular hitch in the offroad towing world. It was also rapidly finding a home among those who would never tow offroad but wanted its simple convenience.

In 2009, when Vehicle Components began the testing of their new hitch, the basic intent was to produce a reliable and easy to use coupling that could be employed with reliability offroad and would be easy to connect and disconnect on sand and uneven surfaces. The DO35 (for “drop-on 3.5 tonne rated”) V2 was later introduced with an improved lock mechanism and a check-lock system. This essentially means a dust-proof plastic cap that can only be installed when the hitch is properly installed and the locking mechanism is engaged. 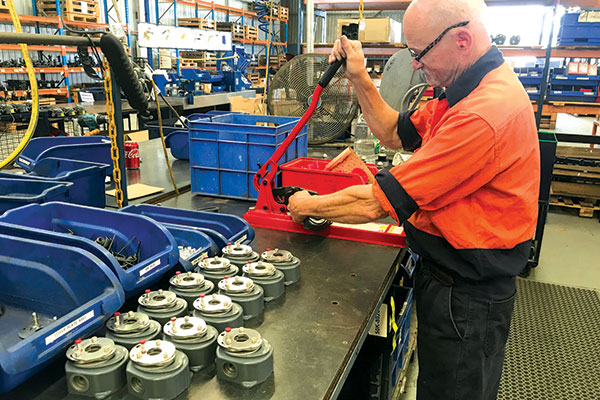 So why go through the effort and expense of a complete redesign and re-engineering process?

“Version two was becoming extremely popular so we needed quicker and more efficient means of manufacturing it, and also we were finding that people were using the weight distribution systems (WDH) more on the ever heavier caravans we see coming out of the manufacturers and finding new and more inventive ways to increase the force that’s generated by them.

“The WDH’s are sold with a one-foot bar and I’ve seen people with metre-long bars jacking them up. We actually became concerned that because of that abuse we needed to start looking at the coupling to make sure that it had plenty of strength in it.”

Australian standard 4177 requires the centre of a laden 50mm ball couplings to be between 350 and 460mm from the ground. This is because of the limited articulation of a ball coupling, and any height outside of those specified will mean the ball will be at too steep an angle and too near the limit of its articulation. That makes it likely to either damage the towing vehicle or lever the coupling off the ball.

Because the DO35 coupling uses a pin instead of a ball, the height restrictions don’t apply, giving greater freedom for towing heights as well as enhanced strength and articulation.

“We did some static testing where we put a load cell underneath the tow pin,” Andrew said.

“We then put the coupling on top with a set ball weight and then we put the weight distribution bars on it and found that it more than doubled the load that the coupling and the pin experienced.”

“We took that information back and put it through static and dynamic finite element analysis (FEA),” Andrew said.

“Originally we used static analysis which is just a single input loading and that tells you where your high stresses are.

“We outsourced the dynamics, which is the same thing only it has a fatigue cycle in it so that you can get an idea of the fatigue life of the system. Now we have bought the software and we do it all in-house.

Where the older DO35 models were made from a piece of square hollow section and a laser-cut mild steel plate, the new housing is cast, which we thought seemed a little counter-intuitive as castings are usually seen as being more brittle than machined or forged components.

“It all depends on the type of material you choose,” Andrew said.

“You can have everything from material that is quite soft to very hard. We picked something in the middle because we’re quite conservative in that we like things to bend and not fracture.”

Vehicle Components then go through a process of machining all the bolt lands – the area where washers, bolt heads and nuts come in contact with the surface of the components – which is an expensive process but which enables the fasteners and their associated components to clamp down on something that is perfectly flat for enhanced grip. The interior of the tube section is bored so that the bushes (which extend in from each end for 25mm) fit with an appropriately tight tolerance for the free rotation of the yoke and its spindle. Then the lower face of the housing is also machined, because any imperfections run the risk of pre-stressing the housing when bolted down onto the drawbar.

In the new model there is a version designed to mount a hand brake, which is styled off an automotive handbrake and lies flat when released to maximise clearances with tow vehicle rear doors. There is a version (the model R) without a handbrake mount, but the provision to be added later.

The Vehicle Components team figured using the old yoke with the new housing could look a bit average. In the older versions, the yoke was a pressed metal unit with a machined spindle all welded together. Early trial versions for V3 had a cast metal yoke but these proved to not be strong enough, so Vehicle Components forged a one-piece yoke, which is significantly stronger. The yoke is fully machined on all faces where it comes in contact with other components. There is an O-ring to keep out dust and beneath the pivot at the front is a small poly bush, which is essential for a smooth action.

The main body of the coupling has a zinc-nickel electroplating undercoat designed for maximum life even in salt water environments. Over the outside of that coating is a black e-coat to resist stone damage.

The main spindle lock nut is also an in-house manufactured item, produced from forged steel. The front bumper – the plastic surround to the locking mechanism – and the cap are all new as well. The bumper has been reduced in length for improved clearance. The cap on a DO35 is a vital component. It is dust and waterproof to keep the environment outside away from the locking mechanism. In the latest version it has been reduced in length and the ring on the front of the cap has been eliminated because of splitting. A small reflector made from a 3M reflective material has been added to the centre of the front bumper to assist those using a reversing camera to align the tow pin with the hitch when reversing. The tether for the cap has been modified to a coiled self-retracting material to reduce the risk of catching unwanted objects.

The small rubber cap on the top of the latch release pin, which had a habit of falling off, has been replaced with a small red metal button.

The forged tow pin has been increased in height slightly to permit it to be used with weight distribution systems without adaptors.

“You will still need them on some, but most you don’t,” Andrew advised.

Because the pin is higher, it had to be made stronger to resist the greater bending forces. The new tow pin is backward compatible and can be used with earlier models of the DO35 where the use of weight distribution hitches is a requirement. In fact, the new hitch is so strong that Vehicle Components actually broke their test rig while trying to find the limit.

The ADR standard 62/01 dictates longitudinal, vertical and transverse loads with which couplings must comply and remain operable. This is the older standard and the newer 62/02 imposes lower standards. However Vehicle Components chose to comply with the 62/01 as they believe that, “stronger is better”. The DO35 V3, designed as a 3.5 tonne coupling, is now verging on being as strong as the company’s 4.5 tonne coupling, and is 50 per cent stronger than the outgoing model.

The DO35 V3 has been on the market now for just on a year and in the past six months has doubled the sales for this model.

“I think people are starting to see the benefits of it, in not just offroad but also in its ease of use, in that it is easier to use than a 50mm ball or any of the polyblock style of hitches.”

The DO35 V3 underwent the biggest testing program of any of the company’s hitches, being not only put through the in-house engineering and software hoops but also taken over 45,000km of on road testing. This included one of Vehicle Component's famous “Rat Runs” - one of their well known torture tests through the toughest terrain they can find. It recently went through Cape York via the Old Telegraph Track, including famous Gunshot Creek.

The DO35 comes with a two year warranty and is backed by 46 Vehicle Components approved service centres.

Check out the full feature in issue #121 of Camper Trailer Australia magazine. Subscribe today for all the latest camper trailer news, reviews and travel inspiration.