The guy was a nutter — eccentric at the very least. But he knew some hidden spots and after we had helped him pick up his roofrack, lost on a nascent Gibb River Road, he was more than happy to show us them, especially after he had sampled some of Viv’s great camp oven cooking.

He stayed with us for a week or more and, in the end, we had to tell him to leave. Thin and short he wore black footy shorts and a green T-shirt that never left his body — they looked like they had been worn for at least a year or so beforehand. Barefooted, he would race over the rocks and thru’ the spinifex, keen and eager to show us his next undisturbed and concealed secret spot. It was hot and while we swam at every opportunity, he never even dipped a toe in the water.

His vehicle was an old petrol shorty ‘Cruiser, crammed with a 44 (205L) drum of fuel, a tangled mass of claim stakes, rocks and ore samples, (he claimed to be a geologist looking for diamonds — this was before Argyle was discovered). His food supplies consisted of a loaf of bread (just one), a tin of marmalade and a jar of vegemite, along with a 5-gallon container of water, all of which bounced around with the claim stakes, the rock samples and the geologist hammers and shovels. He had no stove, and certainly no fridge, or even an esky. 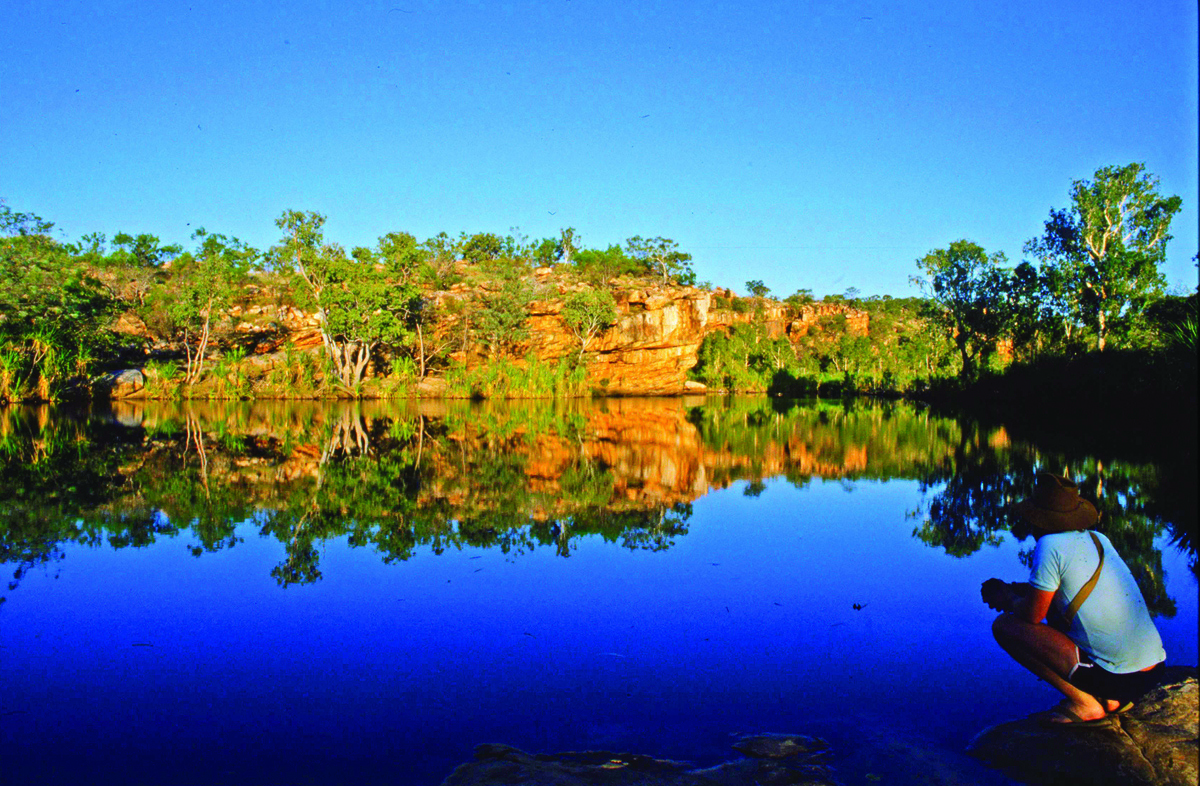 We had left the bitumen earlier, down at Port Hedland, with the highway being dirt from there north. At Broome we pulled in to do some repairs to the Landie (an ongoing saga) and the boat trailer that was slowly disintegrating under the 16ft fibreglass boat I had at the time. Loaded with scuba tanks and a compressor, along with fuel and other odds and sods, it was, looking back, lucky to have got that far.

The trip — Viv’s and my honeymoon — was a three-month sojourn around the western half of the continent with my lifelong friend and acclaimed photographer, Wade ‘Taffy’ Hughes. Broome was still a frontier town and the last of the traditional pearling luggers would pull up at Streeters Jetty to unload their catch of shell while young Aboriginal kids played in the water beside them.

We headed to Derby and heard about this track that cut through the very heart of the Kimberley, via the Gibb River homestead. We thought, ‘What the hell, let’s do it!’

After a diversion to Windjana Gorge and Tunnel Creek (there was only one other camp at Windjana and nobody at Tunnel Creek), we met our crazy geologist on the bridge across the Lennard River while I was netting water insects for the Australian National Museum.

What followed was an amazing week of discovery. Many of the places this guy took us to are still well off the beaten track and while we subsequently wrote a guidebook to the Kimberley (and still do for Hema Maps), we’ve never divulged the whereabouts of these places. Like the crystal-clear springs and the rock art shelters east of Windjana, and the magical shawl cave and cathedral-like enclosure surrounding the ‘Dog Cave’, west of that well-known tourist spot.

Pushing north, after telling our newfound mate to leave, we stopped at Mt Barnett, which was then purely a cattle station, with the homestead a traditional Kimberley one with a corrugated tin roof held up by rough cut timber, low natural rock and metal walls and a stamped earthen floor. The new owners from Victoria were about to start mustering the wild cattle on the place (there had been no round-up for five years) so we stayed to lend a hand. It was brutal, bloody, tough work. The three Aboriginal stockmen on the place loved the challenge and always led the charge out of the house to the horses and mustering yards.

Apart from the station staff and Peter Lacey who came down from his Mt Elizabeth property to lend a hand, we saw no one else, having the fabulous waters of the Manning Gorge to ourselves for a wash and swim (and a scuba dive) after a long dusty day catching, branding, castrating and dehorning wild bulls.

After a week, we tore ourselves away and headed north to Gibb River station, the track just a grader blade cut through the scrub and onto Jacks Waterhole where a new homestead for the surrounding Durack River station had been built out of the normal native timber, corrugated iron and natural stone. It was soon to be washed away by a big flood.

The track improved after the New York Jump-up (bypassed by the new road) and the Pentecost River crossing before we stopped at El Questro Station when it was just a big cattle property trying to make a few dollars out of adventurous travellers wandering past. Once again, we had the springs and gorges to ourselves, and although all the names have changed since those days, the delights of this property are much the same, albeit a lot more crowded.

We rolled into Wyndham a few days later, the adventure over and the boat trailer on its last legs. Little did we know we had been lucky enough to experience the Kimberley when it was still very much pioneer country.