I first met North Stradbroke Island near Brisbane, Qld, in about 1975. Straddie, as it’s affectionately known, has intrigued me ever since, sitting as it does in the vast expanse of water known as Moreton Bay that it shares with Bribie and Moreton islands and about 360 smaller islands that act as giant stepping stones to the Gold Coast.

To join the crew of Patriot Campers on North Stradbroke Island was a chance to reacquaint myself with a place which has tugged at the ticker for the last four decades. The island is far more than just a breakwater or seawall protecting Brisbane and the Gold Coast from ocean swells.

After a 45-minute vehicle ferry crossing from Brisbane’s southern bayside suburb of Cleveland with Patriot Campers in tow, we found before us an island of beautiful complexity, of long white beaches and quiet villages with, at its heart, an outstanding freshwater lake system. 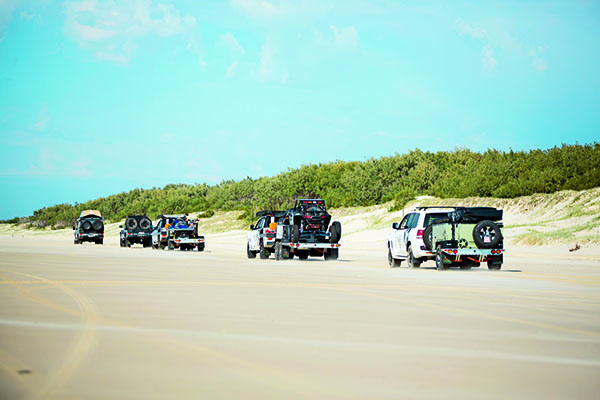 The ferry empties its belly at regular intervals at Dunwich, the gateway village to the island. After a short jaunt from Dunwich, we were hauling our trailers along the smooth white sand of the 32km Main Beach.

Main Beach is not a beach for first-time 4WD camping enthusiasts. Access is limited and requires a permit. While driving on the beach is not too difficult, beach and campsite entry points are usually tricky. Even with an experienced crew, the beach held our convoy still several times, forcing us into sand churning, gut busting winch or snatch strap rescues.

The shorter, but no less beautiful, Flinders Beach of the northern aspect of the island is a far easier adventure for new campers. What’s more, the beach access is quite easy, meaning there’s far less likelihood of getting a face full of sand pushing your forlorn tow vehicle out of a steep sandy bog. By comparison to Main Beach, navigating a 4WD across Flinders is akin to a stroll across a Japanese zen garden. Don’t worry though, what it lacks as a driver’s challenge, it makes up for in unbridled beauty.

Despite its banal name, Main Beach on the island’s east is as inspirational as any white water surf beach anywhere. Experienced body surfers or board riders are likely to love the rawness of the big swells this beach attracts. The local word is, surfers will get the most out of Main Beach by taking in the view from Point Lookout and watching the surf action that starts pumping when a northerly is blowing. Remember that a south-easterly blow produces too many rips and side currents. That’s fine though, because as a playground, Main Beach has many charms.

While fishing on Straddie, you could bring to mind the stories of how, in times gone by, the local Quandamooka people would use these long gutters and a special bond they have with local dolphins to catch fish. Quandamooka men would call in the dolphins by slapping the water. The dolphins would herd the fish into the gutters allowing the community to catch the fish in nets. After the people had enough fish, they would feed some back to the dolphins. Even today, anglers on the island can use Indigenous tips such as looking out for sea eagles betraying the presence of mullet to improve their luck.

Although fishing with dolphins is not on these days, travel up to the Stradbroke Island village Amity Point camping ground early any given morning and you’re likely to find dolphins and other marine wildlife down by the jetty. It’s something of a local secret, so keep it to yourself.

Amity Point is one the three villages on the island, the others being Point Lookout and Dunwich. Each has its own character, and each is worth a visit if for no other reason than to experience one of the many cafes and restaurants like Seashells Cafe, just along the road from the quaint Amity Point General Store. Seashells is renowned for its superb whiting and chips.

Of course, when you’re towing a camper trailer, it’s reassuring to know that there are camping options from well-appointed yet affordable campgrounds as well as beach camping at Flinders and Main Beach.

While National Park rangers look after beach access and the island’s national park environment, Straddie Camping caters for all camping on North Stradbroke. As an Indigenous organisation, Straddie Camping is a wonderful source of information about island camping, lore and the environment because of its connection to the local Quandamooka community, which possesses a collective cultural memory stretching back at least 25,000 years.

If you chat with Quandamooka community members before visiting Blue Lake National Park, you’ll get a better feel for it as Kaboora which means ‘silent pool’. It’s an experience that’s best at dusk as an abundance of forest birds and reptiles scamper through the bush. Blue Lake is not accessible by car and visitors must undertake a walk of just under 3km each way to enjoy the lake.

If that walk is too far for a freshwater swim or picnic, a 2WD car will get you to Brown Lake near Dunwich.

Opportunities for swimming, fishing and picnicking were among the many highlights for me and, until my jaunt with Patriot Campers brought me back, I had waited too long between my visits to Straddie.