The coast of Northern NSW is jam-packed with awesome beach campsites, and Borgy has picked out five of the best.

Ladies and gentleman, boys and girls, it’s time to get excited. Why? Well, it’s not because we’re about to blurt out some of the best campsites in New South Wales. It’s not even because we’ve got all the information you’ll need to make your next camping adventure the most spectacular one yet. Nope, we’re about to go one better and chuck you the keys to the best coastal camping itinerary since Captain Cook set sail for the land of Oz! Ok, so I might be getting a little bit carried away there, but hear me out. When it comes to ocean camping retreat, some spots naturally offer more than others. But we’re going to let you in on a little secret; you don’t have to pick just one! Nope, we thought we’d let you in on an absolutely epic five beach camping experience that’s been tried, tested and proven to make you want to quit your day job! Yep, this is the itinerary from heaven! So, what are we waiting for? Let’s get stuck into it! 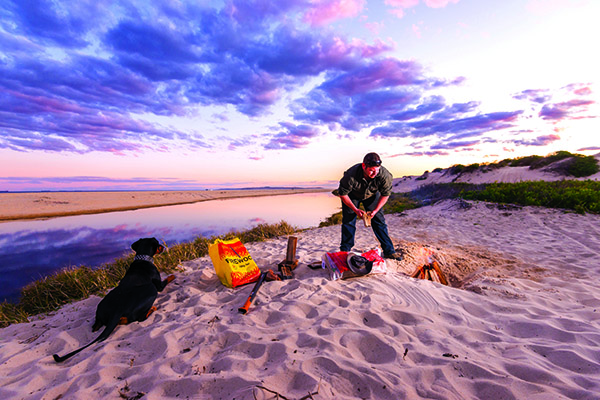 To kick-start our epic beach hoping adventure it’s pretty darn hard to resist a night or two on the mighty soft sands of Blacksmiths Beach. It’s one of the closest of its kind to Sydney that you can legally drive and camp on, which makes it the ideal spot to stay when you’re high-tailing it from work on a Friday afternoon. The sand is about as soft as an over-used bean bag, which can make towing heavy campers a little tricky, but hey – that’s all part of the adventure, right? There’s an inlet there which is the perfect spot to pull up and let the dog go for a dip in between chasing seagulls and ruining the kids' sandcastles. One thing’s for sure, cracking a cold beer just as the sun sets and the sky turns to a majestic shade of purple is just what you need after a hard week at work. The fishing is great here, too, with some pretty big catches from the area over the years, so it’s definitely worth dangling a baited hook around the place and trying your luck.

With soft sand and steep dunes, this particular stretch is a bit of a challenge and a heck of a lot of fun to lock in the hubs. In fact, you could say it’s the main attraction. However, it’s also the perfect spot to bring the BBQ, the frisbee and a few tunes and bask in the sun. Oh, and don’t forget to bring a few old rubber tyres tubes; floating around the inlet/lagoon wearing nothing but a pair of budgie-smugglers and a big smile is definitely on the cards, too.

Can’t decide between camping on the beach or by the river? Visit Farquhar Park and do both! Situated on the mouth of the Manning River you’ll find this little gem is what dreams are made of, especially if you’re a keen fisho. Take the tinnie for a blast up the river and wet a line. Or ditch the boat and walk a few hundred metres up to the beach or rivermouth, and try your luck there. Heck, dragging the old canoe out for a relaxing paddle on dusk is a bit like striking gold, it’s that good! There are 25 shady and secluded campgrounds in total, and you’ll need a 4WD or a boat to reach them; so pack your sense of adventure! In fact, it’s worth saying you can launch the boat straight from your own personal river-front camping spot, but you’ll want to get in and secure a cracking site early if it’s a weekend. Oh, and don’t forget this campsite is only accessible when the tide's down, so bring everything you need to be totally self sufficient and plan your arrival and departure around the tide chart.

Fishing with the kids is the golden ticket around here. The Manning River is full of crowd favourites like the lizards of the water aka flathead, plenty of biting bream and even the occasional whiting. Dolphins frequent the river, too, so keep your eyes peeled.

Now this spot is a bit like a slice of heaven on earth. Nestled within its own private seaside cove you’ll find Kylie's Beach, a hidden gem just waiting to be explored by the whole family. The campground itself is conveniently located on grass and protected quite well by shrubbery, but the beach is literally a few strides away. You can hit the sand by foot or with your 4WD; just make sure you suck in all that sweet serenity goodness while you’re there! For the kids, this is the kind of place that’ll create lasting memories, especially with resident kangaroos bounding along the sand and koalas chomping on gum leafs within the park. Just when you thought it couldn’t get any more relaxing, you could take a stroll down the Metcalfes Walking Track, which links Indian Head and Kylie's Beach in Crowdy Bay National Park. This is where you’ll find Kylie's Hut, which was the rustic retreat of Australian author Kylie Tennant. Oh, and the fishing’s good here, too, especially around the rocks near the creek on an outgoing tide. But hey, don’t take my word for it!

Without a doubt, the wildlife at this campsite will steal the show for the whole family. The gumtrees in the area have proven to be a favourite for koalas, so remember to pack the torch and see what you can find at night! You won’t have to look all that hard for the kangaroos, though; they’re bloody everywhere!

Looking for a relaxed surf-side retreat? The kind of place that lulls you to sleep as the waves break in the distance? Well, this could just be your new favourite campsite. Yep, this is the sort of place you can rock up to and seriously never leave. Where is it, you ask? It’s called Limeburners Creek Nature Reserve, which is home to the Point Plomer Camping Area and one of the best surfing stretches of coast in the country, bar none! You’ll get your sand driving fix just a few clicks away over at North Beach, but be warned; the sand is soft at the exit points and there’s bugger-all beach left on high tide.

During winter and spring, it’s a top spot to go whale watching. The humpback whales around here have a real tendency to breach and show off as they pass through on their migration run. Oh, and don’t forget to lace your boots up and head for the Big Hill Rainforest Walk. It’s a grade four hike that stretches a kay or two and takes in everything from low heath vegetation and Pandanus Palms to Strangler Figs, Coastal Blackbutt and more wildlife and birdlife then you can poke a stick at. There’s even a chance you can spot micro-bats flying through the tree tops as the sun drops in the background; it’s a rare site but one you won’t forget!

If there is one place you’re pretty much guaranteed to catch a cracking wave, it’s here! In fact, the stretch from North Beach right up to Crescent head and South West Rocks is a haven of secluded, private and hidden surf spots for the adventurous at heart. If you look about as graceful as a penguin running a marathon on a surfboard, break out the boogie board instead – just have a good crack!

Picture this: you’re camped between two of the most scenic headlands on the NSW coast, the beach goes from nice soft and tanned sand to a stretch of exotic pebbles displaying thousands of natural colours as they completely cover the shore. A cool sea breeze and the sounds of waves crashing are never too far, crystal clear water slowly fills up your own personal swimming holes as the tide rolls in, and there are several vantage points to spot the odd whale or dolphin across roughly 80km of pristine coastline accessible by foot. Yep, this is the stuff dream are made of! Access is by 4WD only, which helps keep the crowds away. Oh, and don’t forget to take the kayak for a paddle up the main inlet – the mud crabs will almost jump straight in the pot when the conditions are right!

For those with plenty of energy, the Yuraygir Coastal walk is a must! It’s a 65km one-way hike that’ll take around 4-5 days to complete, although you can choose smaller chunks to tackle if you don’t want to tackle the lot! You’ll find loads of places for whale watching, snorkelling and swimming, with overnight stops at beach campgrounds, along with some of the most spectacular scenery in NSW.