Roughly two and a bit hours out of Sydney lies what could only be described as an adventure seeker’s paradise. It’s not exactly a top secret location, not by a long shot. I guess it’s hard to keep some of the most exhilarating low-range tracks in the state hush-hush, eh? Add in the perfect setting for water based activities and it’s no wonder this place is a local hotspot! Yep, this is a favourite among many for a whole truck-load of reasons, the main one being it’s got a heck of a lot to offer!

I’ve had the pleasure of busting plenty of 4WD parts out on the tracks within the region, so while it might have taken a while, I like to think I’ve learned a few lessons since then. Yep, this time around it was time to let my hair down with a bit of riverside camping, just me and fur balls – no, I’m not talking about the magician behind the camera, Tony. By fur balls I mean the two dogs! Anyway, back to the point. So this little adventure kicked off with a coffee at Nowra Maccas – the perfect meeting place to catch up with anyone joining you for the trip, might I add. Half an hour later and we were poking our noses up practically any track we could find, you know, scouring the place for something extra special. In hindsight, that probably wasn’t the smartest thing to be doing while the camper was still in tow. I figured that out after getting caught half way up a steep hill with a “road-closed” chain blocking the track. There’s nothing quite like reversing 200m down a wet track in low-range, with a shear drop off to one side and about as much traction as a bucket of marbles on a slippery slide! 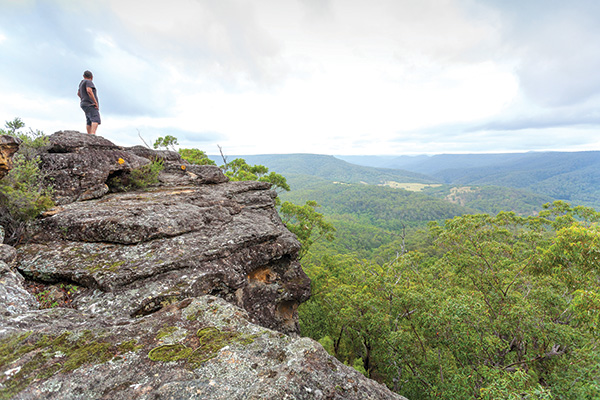 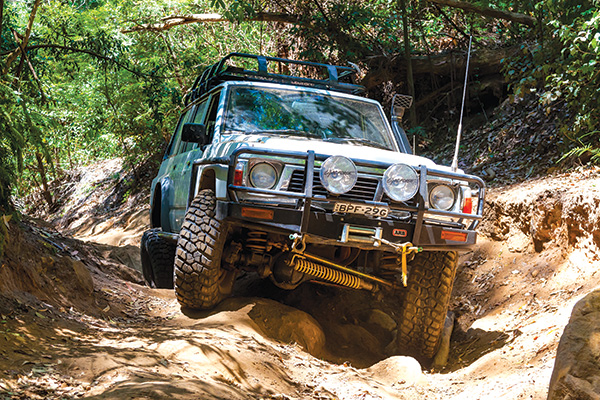 Once that little nightmare was over, we decided to set up camp at the main campsite at Danjera Dam. The track in is quite steep; no problems for a camper trailer but you’d think twice about lugging a caravan down there. On the way in, just before the main decent there’s a lookout. There’s no signpost and you’ll miss it if you blink, but by golly it’s cool to see. I ended up just relaxing there for a good half an hour just to take it all in!

Once you get to the main campsite you’ll find there are toilets available, fire pits are plentiful and you’re no more than a stone’s throw away from the water. We were there mid-week so we had the place to ourselves, but I imagine it’s not quite as quiet on a weekend, given the amount of random campfire pits scattered around the place, and being located pretty close to the town of Nowra.

Now there are a bunch of dead trees protruding above the dam’s waters, which were presumably sunk, along with the old ghost mining town of Yalwal back in 1972 when the area was flooded. That’s right, there’s a whole town under the dam – talk about an interesting paddle, eh? This historic goldmining town had the whole kit and caboodle too. We’re talking a school, pubs, banks, a post office and general store! Some of the homes were dismantled and used as building materials during WWI, and back in 1939 bushfires destroyed the rest. The area was purposely flooded to create Danjera Dam; the only visible remains being the old mine workings in the surrounding areas and a graveyard! Monument rocks can also be found where the original residents etched their names in the stone.

For the fishos, there are plenty of opportunities to be had; mainly because the dam is stocked with bass and rainbow trout. We all know how polished my fishing skills are; I’m about as refined as a bull dog eating mayonnaise! But I had a crack and flicked a lure around for a while. The dog loves going for a paddle, probably because I do all the work. But I’ll tell you what, as I floated around the place the sweet, sweet serenity and charm of this place really kicked in! Yep, there’s nothing like a gentle breeze to wash the stress away, and after yet another failed fishing attempt it was time to head back to dry land. I’m pretty used to not catching any fish these days, and to tell you the truth I’ve found it’s hard to beat cooking a campfire feed from hell right on the water after a relaxing paddle like that! If you ever want to see a live feeding frenzy, bung a few gourmet snags, onion and the secret ingredient, Dijon mustard on some hot dogs buns and watch the hoard come running!

WHEELING AT ITS BEST

From the calming waters of Danjera Dam, it’s time to head over to Yalwal State Forest and lock in your hubs. The infamous Monkey Gum Track is the perfect test for most mildly-modified vehicle: even the angrier 4WDs have their hands full on some of the harder sections here. Obstacle-wise, you name it and this track has got it. We’re talking ruts that will make your butt pucker, rock steps that will turn your knuckles white and a bunch of technical sections that will prove to be a heck of a lot of fun! You’ll claw your way up the track wondering how long this low-range stuff is going to go on for, but when you reach the top it’s all worth it! To your right there’s a big, massive boulder with a raggedy old ladder, go for a quick climb and you’ll be able to practically taste the accomplishment with a super cool lookout up the top.

Another great little area is the rock gardens, which is basically like a bit of a play area. There are a few easier tracks to navigate your way through, but they’re out-numbered 10 to one by much more technical lines. Either way, you’ll have a blast!

Great views, relaxing waterside activities and crazy 4WDing, what more could you ask for? If you’ve got the opportunity to visit this place mid-week, it’s sure to impress. No power boats are allowed, which makes it absolutely ideal for the keen paddler, or even just for a quick dip to cool off. Heck, if that doesn’t put a smile on your face, no doubt the hundred of 4WD tracks around the place will!