I don’t know about you, but there’s only so long I can sit still for when it comes to camping. Even the most relaxing campsites are no match for the ants in my pants after a few days. That means when it comes to finding new places to pitch my tent on wheels, I always look at what’s on the menu in terms of things to see and do.

So, with that in mind, it’s no surprise that Lithgow is like the king of the castle when it comes to adventures close to Sydney. There is no shortage of things to see and do around here, and it doesn’t matter if you like to rough it or go glamping – there’s a place to suit everybody. 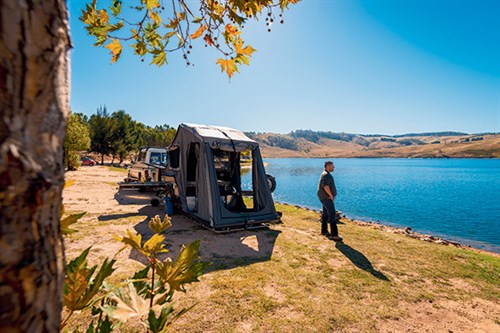 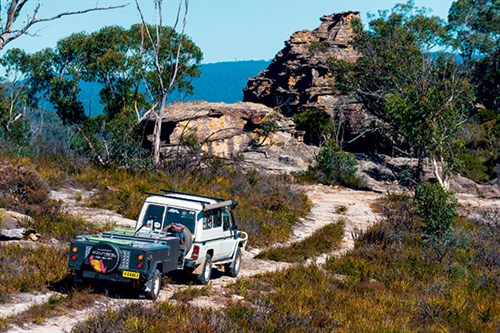 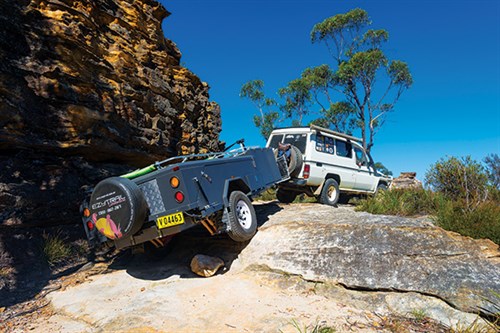 I just wanted to visit the area again before the big cold sets in. Why? Well, let’s just say this place is responsible for the coldest night I’ve ever spent in a swag! Dead-set, I’ve camped in about a foot of snow in the High Country and spent a week in a wet swag in Tassie, but one night at Lithgow’s Lake Lyell was the coldest by far!

I’m talking the kind of cold that freezes the olive oil solid before breakfast, despite being hidden out of the draught! Anyway, luckily for me, the weather was still fairly warm this time, at least warm enough for me to enjoy the area in full.

Many 4WDers consider Lithgow the gateway to the central west and the opportunities to put a smile on your dial are absolutely endless.

There’s a whole heap of 4WD tracks in this area that range from fairly easy to absolutely insane. If you’re well prepared and have knackers of steel, you could give Mount Walker a crack; it’s a super steep and rocky climb that leads to a spectacular viewing point up the top of Lake Lyell.

If that’s not your style, there’s also a heap of other tracks around the lakes domain, with places like Rydal and Lidsdale State Forest kicking it up a notch. In fact, you’ll most likely stumble across 4WD driver training courses which take advantage of the technical driving the area has to offer.

On the other side of Lithgow, you’ll find places like Newnes State Forest and the old Zig Zag Railway area, which is a 4WD wonderland with tracks catering for touring style adventures right up to the weekend warrior-type stuff.

For water-based activities in this region, it’s hard to go past Lake Lyell. Seriously, it’s one of those spots you won’t want to leave once you settle in! But for one of the best, if not the best, places to camp in this area is the Lake Lyell Recreation Park. It’s not what you would call a full bush camp. In fact, it’s got boom gates at the driveway entrance and a kiosk, but hear me out.

While there are other campsites around the lake, the country around here is steep and hilly to say the least, and most of those full bush campsites are squeezy to get into or are on uneven ground. All of this makes Lake Lyell a bit less camper-trailer friendly than we would hope, especially if you end up stuck on a steep incline!

The good news is Lake Lyell Recreation Park is easily accessible and ideally positioned at the heart of the adventure. Once you get in, you’ll have no trouble finding a magic little piece of paradise right on the edge of Lake Lyell itself, providing it’s not school holidays or a long weekend.

If you’ve got a kayak, bring it. This place is absolutely perfect to go for a relaxing paddle, and there are brown trout, rainbow trout and Australian bass found in these waters, so you’d be mad if you didn’t drop a line in. Canoes are available for hire for $15/hour or $40 for four hours, and there’s even a boat ramp which is a real hit with locals and visitors alike.

If you need to burn off some energy, strap on your hiking shoes and take a leisurely stroll around the water’s edge and back up through the reserve. It’s a fairly short walk but I can just about guarantee you’ll relax a hell of a lot.

If the Lake Lyell Recreation Park doesn’t sound like your cup of tea, there are plenty of other spots that aren’t all that far away. A few hotspots include Newnes campground and Burralow Creek campground. Or you could head a bit further out and tackle the Turon National Park, too.

When it comes to camping, it needs to be adventurous enough to keep me entertained. Sure, a nice serene spot will relax me for a while, but it’s an adventure-fuelled day that really gets my motor revving, and Lithgow always delivers the goods.

About 20-30 minutes’ drive from camp at Lake Lyell is one of the most awesome natural attractions you’ll ever lay your eyes on, at least within close range to Sydney anyway. Yep, you could be forgiven for thinking this place is part of the Bungle Bungles or somewhere like that. But the pagoda formations are one of the true wonders of the Blue Mountain right here in NSW.

The formations are made from sheets of ironstone which are sandwiched between layers of sandstone. No one really knows where the iron came from or how the formations actually occurred. But the sandstone was formed by a massive river that flowed across the area between 230-250 million years ago.

Today, the formations are a truly magical sight. The dramatic pagoda shapes are scattered around a small valley, and to be totally honest words struggle to do this place justice.

There are actually two separate Lost City sites to visit. One is a walk-in only site and you can get the 4WD into the other but it’s a dead end. It’s a good idea to lock the hubs in to get to both of these locations if it’s wet! The track to The Lost City comes off Beecroft Road, which is directly across the road from the campsite. Turn left into this track and, a few hundred metres along, you will go across a cleared area under powerlines. Cross this and then take the left branch off each of the three Y intersections you come to before you hit a dead end and have to go it by foot.

While you’re in the area, make sure you check out the old Zig Zag Railway. The railway is actually an Australian Historical Railway that’s now closed as it was unable to meet safety regulations. However, it is due to re-open around 2017 with a little luck. Bushfires damaged the sight back in 2013 which pushed back plans to re-open sooner. It’s a real pity because not only was it a great little piece of history, it was considered to be one of the great engineering marvels of the world in its day.

In fact, the Zig Zag Railway was actually how the trains originally descended from the top of the Blue Mountains to the western slopes at Lithgow. It was built in the 1860s, but due to alternative tunnels which descended in a more direct and quicker route, it only lasted a short time.

Check out the full feature in issue #103 August 2016 of Camper Trailer Australia magazine. Subscribe today for all the latest camper trailer news, reviews and travel inspiration.