So, it’s Friday afternoon and the camper trailer’s been sitting there packed and ready since last weekend. You’ve somehow managed to worm your way out of a family get-together and the fuel tank is chockablock. So where do you go? Well, for me, I’m still searching for the ultimate local hideaway, or at least I was before I found this little gem. I reckon every true camping enthusiast needs a camping spot they can call home. And after acquainting myself with this tidy nook, I’ve got a sneaky suspicion there is going be a whole lot of Sydneysiders listing the golden hills of Abercrombie River National Park as their second home address very shortly. So let’s have a look at why this spot is such a cracker, shall we?

First up, you’re looking at about a three-hour run to get to the edge of the park from the heart of Sydney, so it’s fairly accessible for quick 4WD-based weekenders. But, to be honest, I snuck out there at the crack of a sparrow’s fart on Friday morning to explore what was on offer before the rest of the lads rocked up in their brand new 4WDs with all the gear and no idea (we all know a bloke like that, right?). The idea being I’d find the best spots and take them on bit of an offroad tour.

Now, as you enter Abercrombie River NP, you could be forgiven for thinking it’s just like any other national park, but the gentle bends of the dirt trails give this special place away. As you start heading up into the hills, there’s something about the atmosphere that changes. The forest opens up, the gum trees create a peaceful mood and, most importantly, you can chuck the 4WD in low range! You’ll definitely need it in some places, as the tracks can get pretty damn steep. White knuckles are a given if you get caught out, especially with a trailer in tow. This is mainly because the track’s surface is basically just loose gravel and rock, so dropping your tyre pressures down to between 18-25psi will help resist against punctures and hopefully give you a bit more traction, too. 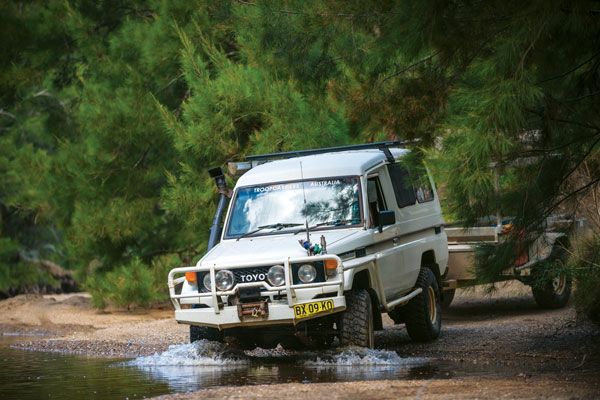 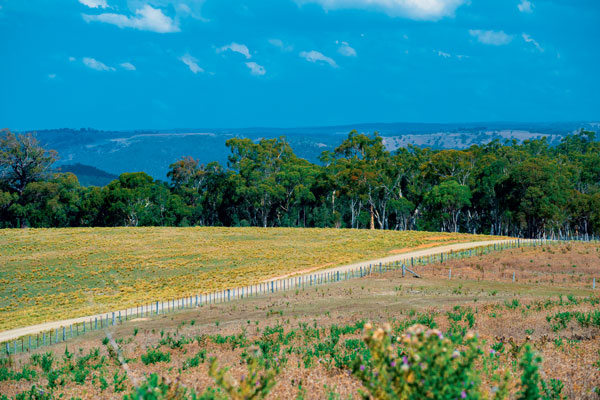 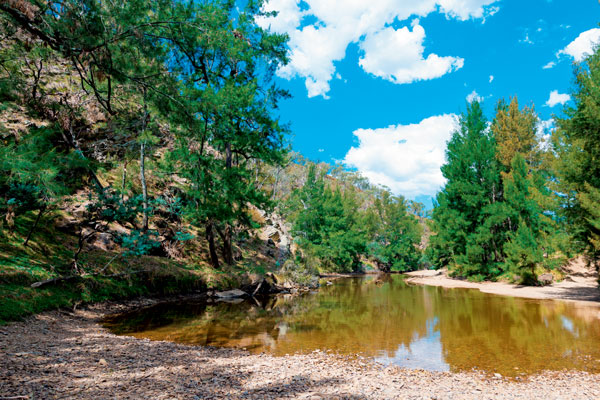 Before the trip, you’ll want to make sure your trailer’s brakes are working, as there’s nothing worse than having more than a tonne of camper trailer push you down a steep track. In fact, because of the sheer steepness of some of the tracks around here, some are closed to camper trailers or during wet weather. You’re much better off unhitching the camper trailer at the campsite before you head off exploring, anyway.

There are plenty of designated campgrounds in the park, and each has its own little quirky attributes. Silent Creek campground, for example, is accessible by 4WD only thanks to the steep entry in. It’s a nice flat area that’s well protected by a rocky cliff and shaded by casuarinas. But you’ve got to take a stroll along Silent Creek towards the Abercrombie River to really take in the beauty of this place. While the creek can dry out during a drought, there are some spectacular swimming and fishing holes to be discovered, and they’re not all that far from the main campsite, either. In fact, there’s quite a lot of Aboriginal history along these riverbanks, as the Wiradjuri and Gundungurra people used it as a trading route – there’s still evidence of their old campsites there now. As with any waterholes in the bush, keep a good eye out for our slithering scaled friends – they like the water as much as we do during the warmer months, and it’s actually quite remote out this way despite being within relatively close range to Sydney.

The campsite of choice for me is called The Beach. Like most of the sites around here, it’s a bit steep to get down there, but it’s well maintained and nothing to really worry about if you’ve got a fairly light setup like mine. To be honest, this is probably one of the more popular sites in the park, but it’s also one of the largest ones with a massive choice of riverside camps. It’s as simple as finding your own little stretch of paradise and calling it home for the weekend! Now, I know what you’re probably thinking if you’ve spotted the photos of my campsite: why the hell would you camp on rocks? Well, the short answer is, because I can! And because most campers simply can’t, I got the entire southern end of the campground to myself. Not bad, eh? The good news is that back up the top there’s no shortage of grassy or sandy spots to pull up stumps on.

The river is nice and deep in sections along here, so it’s a good idea to pack the fishing rod. One of these days, I might even catch a fish to prove the trout fishing is actually good at the right time of year, eh? It’s worth noting it gets really cold here during winter, I’m talking below freezing at times. In fact, it snowed at Oberon last winter, which is only a few clicks away. In the summer months, it gets bloody hot and a quick dip will be too hard to resist. I actually prefer it during winter; there’s something about an ice-cold morning with too much fog to see 4ft in front of you – yeah, I know, I’m probably crazy! But when it’s a bit warmer there’s a good chance you’ll spot a few resident wallabies relaxing down on the riverbank, maybe even a platypus, too, if you’re lucky enough. In fact, we were treated to a glimpse of a wedge-tail eagle soaring above us, which is something I’ll never get tired of seeing. Oh, and if you hear a bit of scratching against your tent at night, there are a few resident possums around, so make sure you keep your rubbish locked up and hidden well away.

Thanks to a landscape of deep gullies with rivers running through them, Abercrombie River NP was a popular place during the goldrush of the 1800s. There’s still evidence and past ruminants of sluices and machinery, even old diggings scattered throughout the park. If you’re one for the touristy stuff, one place that’s got to be on your bucket list is the Abercrombie Caves. Unfortunately, they were closed during our visit but there’s so much history here, I’ll be back for sure. For me, the Bush Rangers Cave is the one to see. It was the place the infamous Ribbon Gang hid out in when they fought it out with mounted police, settlers and an army regiment back in 1830. There’s still convict leg irons found there today!

TIME TO HIT THE ROAD

Well, I don’t know about you but I can hear the sweet sounds of Abercrombie River NP calling again already! Yep, this place is a dead-set must for any keen 4WDer, camper or outdoorsman. With so much to see and do, it’s the perfect place to keep the kids on the straight and narrow. It’s also a cracking spot to just relax and unwind for a few days. And if you want chew holes in your seat you could always go searching for the steeper tracks in the area. Trust me, make sure you’re well prepared with a high clearance 4WD and lockers – if you go looking for a challenge, you’ll find it! I don’t know about you, but I reckon it’s the perfect place to call a second home.

So the next time you’ve got the weekend free, load up the camper, pack the esky and head for Abercrombie River – I guarantee you’ll love it!

Check out the full feature in issue #102 July 2016 of Camper Trailer Australia magazine. Subscribe today for all the latest camper trailer news, reviews and travel inspiration.