Uluru via the Great Victoria Desert

Crunching across a shimmering white saltpan, sunset walkers make tracks across Lake Ballard, lured by intriguing ironstone sculptures that beckon them towards the far horizon.

On the western edge of the Great Victoria Desert, Antony Gormley’s 15-year-old outdoor gallery is one of Australia’s most striking: 51 solitary, spirit-like figures cast from real-life locals, immortalised on a white desert landscape. A stay here, camped on the lake’s gypsum, by the mulga-fringed dunes, kick-starts your red dirt adventure to Uluru – the back way. 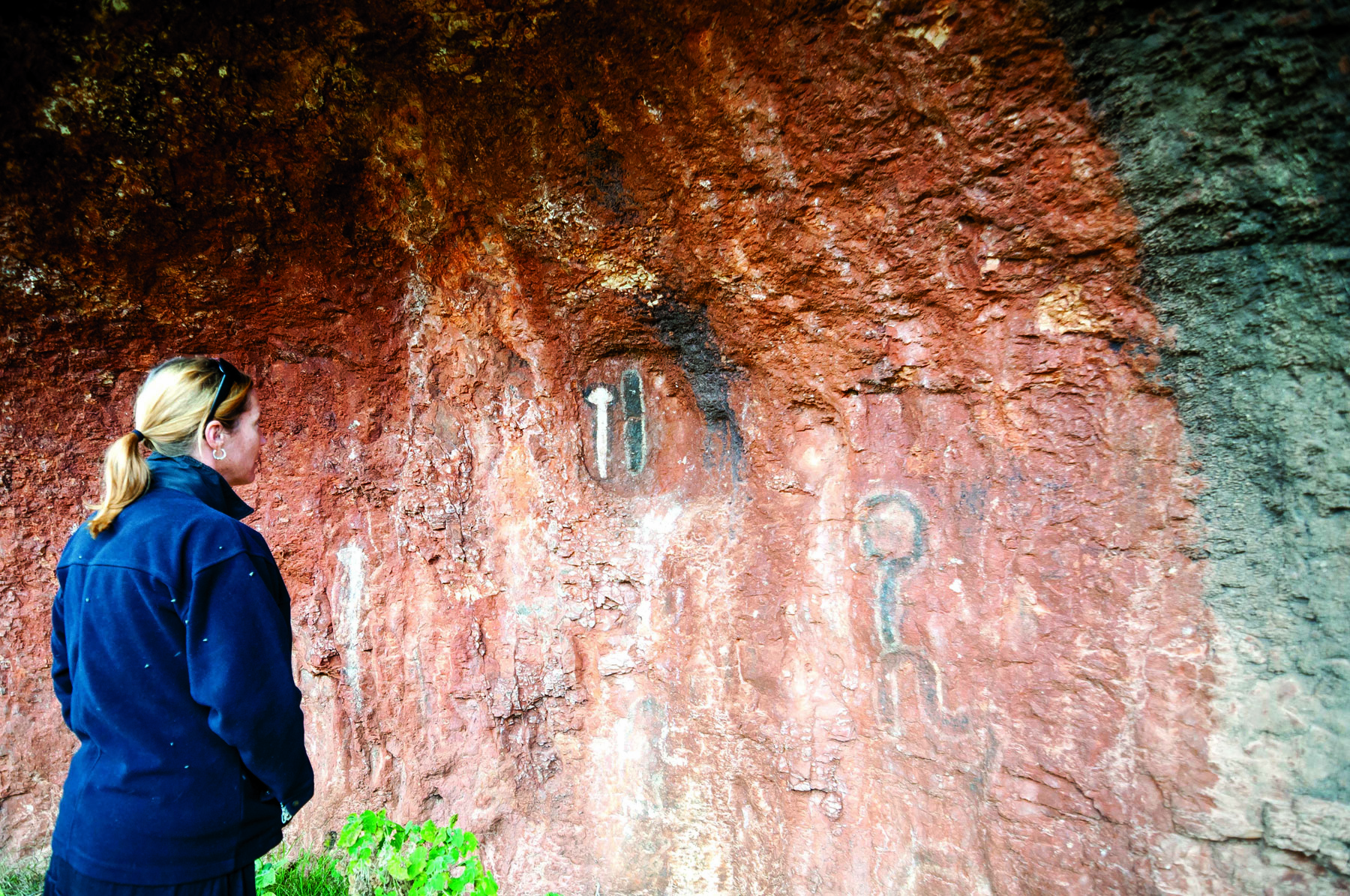 For all its thrills, there’s nothing technical about tackling this remote offroad border run into the Red Centre that shaves more than 1000km off the sealed alternative via South Australia, but there are just enough corrugations and bulldust to let you know you’ve escaped the pack.

The route is peppered with roadhouses dispensing pricey fuel and powered sites for those who don’t want to rough it, so fill your tanks in Leonora and allow four to five days of exploring before the landscape suddenly rises and Kata Tjuta and Uluru appear on the eastern horizon.

The adventure hardly begins before bream-stocked Malcolm Dam tempts diehard anglers off the track to shake out their rods for one last session and steal a catch of spangled perch from the waiting pelicans.

Being deeper than surrounding waterholes, this dam 10km east of Leonora stays full long into the dry season, attracting the region’s black swans, grey herons and pelicans, and offering up bream, carp and spangled perch. The spacious waterfront camping is free, dogs are permitted and there are a couple of picnic shelters, fireplaces and rubbish bins too.

It’s the last really significant water you’ll find once you rattle off the bitumen at Laverton, bound for the Red Centre, so don’t miss this chance to wet a line, paddle and swim.

The desert begins in earnest on the edge of Laverton: 700 kilometres of sandhills and ancient salt lakes and colourfully painted breakaways that crumble off the edge of the desert plateau. British explorer Ernest Giles earned European naming rights when he crossed the desert back in 1875 and endeared himself to the then-reigning monarch Queen Victoria.

Modern desert explorers might assume that 424,400 square kilometres of some of the oldest rock on earth – stretching from WA’s eastern goldfields to the NT and SA’s Gawler Ranges – would be a desolate place to explore.

But far from being a flat, featureless landscape, the northern fringe of the Great Victoria Desert will have you marveling at its painted canyons and isolated mesas that rise steeply and suddenly above endless spinifex plains.

Striped with yellow and white soft clay sandstone and rusty red lateritic soils, the breakaways paint the desert in earthy ochre tones, dazzling under every shifting sunset. If you’re not in a hurry, you can take in the startling panoramic views camped at Giles (Jindalee) Breakaway, a scenic rest area just 56km north-east of Laverton.

Conditions at this and just about every bush camping spot on the track are basic and relaxed; perfect for well-stocked solitude seekers chasing starry night campfires and unbroken serenity.

On this stretch, don’t miss a walk at Deba Gnamma Hole in the Adam Ranges where water lingers in rock depressions or gnammas that are large enough to sustain dingoes, kangaroos and vast, colourful flocks of iridescent green budgies throughout the dry season. You’ll find it signposted to the north of the road, a short walk from the carpark.

The 500 kilometres of mulga and spinifex scrub that stretch on to a civilisation of sorts at Warburton Roadhouse are dotted with especially scenic free camps. Choose Limestone Well (56km past Giles Breakaway) or Minnie Creek Road rest area (another 85km east), and just over an hour’s drive beyond Tjukayirla Roadhouse, Camp Paradise or Manunda Rockhole.

For power and showers, Tjukayirla Roadhouse charges $35 per vehicle ($30 for unpowered sites), which is a good deal for those with a crew onboard because kids and dogs stay for free. A camp kitchen and free gas barbecues keep things civilised and the roadhouse serves meals too. Current fuel prices are $2.25 per litre for both Opal and diesel, a little more than Warburton roadhouse up the track.

West of Tjukayirla Roadhouse you can’t miss the enormous white cross, erected by Indigenous Christians on the hillside back in 1991 and marking the location of some rock art caves. Eroded into the edge of the escarpment, the caves are easily accessed via short pathways carved through the spinifex.

Sunsets on this stretch are amazing so if you’re ready to end the day, shoot for the auspiciously named Camp Paradise or the uber scenic Manunda Rockhole (92km and 122km from the roadhouse). A few kilometres past the rockhole, Desert Breakaway showcases lofty views south over a colourful panorama of crumbling sandstone.

Warburton Roadhouse provides a mid-trip top-up – current advertised fuel prices are $2.10 per litre for diesel and $2.15 for Opal, plus well priced camps for pet-free travellers ($15 per person, $10 per child, and free for those under six years). East of here the corrugations deepen all the way to the NT border, but the abruptly changing landscape is a helpful distraction.

An hour’s drive past Warburton at Yarla Kutjarra Rest Area, we scaled a flattop rise above our protected camp, climbing past the kind of caves that dingoes call home. Rambling easily across the top, our hike afforded us grand sunset views of distant ranges beyond the mulga scrub and it was here than we stumbled upon a pair of camel resting places, unusual cleared patches on the rocky ground.

At the edge of this mesa where a cairn overlooks the Great Central Road, we unearthed a tiny geocache, one of 35 hidden for hunters along the entire Outback Way. For top views and dingoes that sing you to sleep, the camp at Yarla Kutjarra is one of the best, with a toilet, bin, information board and a couple of nice clearings with fireplaces.

It’s been said that more than a million camels roam throughout Central Australia, and for days on this trip they easily outnumbered the cars we passed. They were solitary souls that stopped to stare, and big herds that stopped us in our tracks – females batting eyelids, following big bucks. Though you probably wont see them, a bunch of rare desert dwellers thrive in the Great Victoria Desert as well: a water-holding frog that burrows into the sand, the sandhill dunnart, and the endangered southern marsupial mole – one of the most unusual looking creatures in Australia.

INTO THE RED CENTRE

Although the corrugations deepen as you bump and rattle towards Docker River and the NT border, the trip’s best scenery rises dramatically to the north and east where the rusty red peaks of the Rawlinson Range and Schwerin Mural Crescent create a dramatic spectacle at sunset.

Detour north along skinny dirt tracks to discover some wonderfully scenic camping areas at the base of the crescent. Here we collected a mound of fallen timber and kicked back beside the campfire as an outback orchestra of dingo howls, bird calls and fire crackle warmed up the night. Except for the stealthy dingo whose footprints revealed a night-time visit, we were blissfully alone under a starry sky.

Across the NT border lies a tiny riverside cave with a stellar story to tell. After finding a fabled vein of gold back in 1897 and losing it again, Lewis Harold Bell Lasseter set out 34 years later on an expedition to rediscover his reef.

Unfortunately for Lasseter, his luck ran out near the Hull River after his camels bolted, taking his food with them. Lasseter hunkered down for 25 days in a cave until, near to starving, he made a last-minute run for his life. It was too little, too late, because when Lasseter finally set out to walk east to Kata Tjuta, he covered just 55km before he died.

There’s much speculation about whether Lasseter’s Lost Reef ever really existed, but you can decide for yourself with a wander to the cave where this infamous character spent his final days. After rains, screeching flocks of lurid pink Major Mitchells colour the still pools on the Hull River, and there’s a small picnic area signposted off Tjukaruru Road, 40km east of Docker River.

Once Kata Tjuta appears on the horizon, the silence as wheels glide onto the bitumen is as startling as the heady scent of the squeaky-clean tourists you’ll pass as you explore Kata Tjuta’s Valley of the Winds. This highly recommended trail winds a breathtaking path between soaring sandstone walls and weathered red rock monoliths towering 200 metres above Uluru (7km/2hrs).

At Uluru, another 50km east, the easy Base Walk is a popular choice for those who prefer to stay grounded, leading to rock caves layered with art and seasonal waterholes (9.4km/3hrs). First-time visitors to Uluru-Kata Tjuta National Park will definitely want to spend at least a few days exploring the park’s trails, interpretive centres, art galleries and all the free activities and talks on offer to campers staying at Ayers Rock Resort.

Because you won’t pass through the national park’s toll gate by entering from the west, your first day exploring is free and, after that, a three-day extendable pass is worth every cent at $25 per person.

From Laverton to the NT border where the Great Central Road becomes Tjukaruru Road, and onto Uluru National Park, expect to cover around 1126km of dirt. 4WD vehicles and high clearance camper trailers are recommended. Allow four to five days.

Travel from April to September.