When gold miner Tom Saunders discovered gold on a hill 25km north of the town of Mudgee in 1870, it began a rush of 20,000 people to the area, and soon led to the establishment of the town of Gulgong, which still radiates an air of those heady days.

The roads are no longer dusty strips of dirt, and the number of pubs has declined slightly (from 40 to four), but many of the streetscapes from those wild days remain. They’re frozen in the weathered boards and bricks of buildings thrown up rapidly nearly 150 years ago, and is preserved in the images captured by photographers Beaufoy Merlin and Charles Bayliss.

In those photographs, hard faced men lounge in front of the American Tobacco Warehouse or other structures that were originally just weatherboard fronts for bark lean-tos built along the edge of the goldfield tracks. The streets of Gulgong are still narrow and wind around, reflecting the hasty establishment of a shanty bush town. You often find yourself pulling into the kerb as an oncoming vehicle crawls between cars parked on either side of the street. 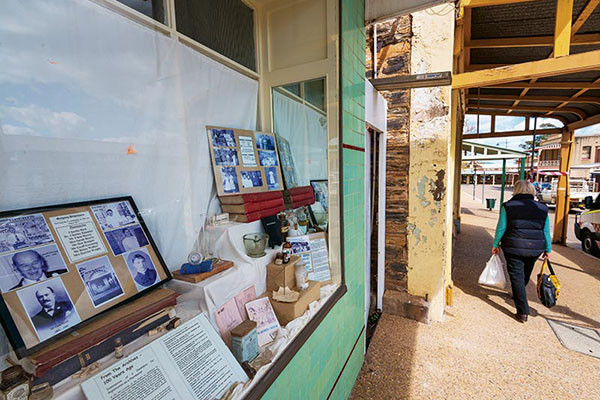 The streets, once lined by rows of tents, are two horse-drawn drays deep, and the twists mark where the tracks dodged boulders and large trees. There was gold to dig and no time for the niceties of removing obstacles.

Fortunately, Gulgong today is a relatively sleepy little village, with room for these restrictions, but in the 1870s it was a raging centre considered to be the ‘last of the small man’s rushes’ drawing hopefuls from Australia’s east. Here, gold had eroded from ancient bed rocks and was carried in surface streams that had long since dried up and been buried as the landscape changed. And prospectors found the burnished yellow metal in the leads that straggled through open country, following those ancient creek lines.

By 1880, the surface gold had been virtually all worked out, as had deposits in the surrounding area, and the deep hard rock deposits were too difficult to find and mine. Almost as quickly as it had blossomed, Gulgong sank into the life of a sleepy village. However, the smell of the excitement can still be tasted. Where now occasional farm utes and local residents amble was once one of the busiest and most crowded spots on earth. The crash and clatter of gold stampers, the rattle of horse-drawn vehicles, the excited voices of many men made for an intense scene.

It may seem hard to grasp now, but a visiting English clergyman once exclaimed, “Why man, there’s nothing like it. The view from here is immense, exhilarating. Yes, Gulgong is the hub of the world.”

The high point of all this activity was the intersection of Mayne and Herbert streets. Today, where Mayne Street dog legs around the edge of Flirtation Hill and Herbert Street dips down on the plains to the north and south you are surrounded by the now quiet facades of the local IGA supermarket, a local real estate outlet and other mundane examples of modern commercial life.

As can be seen by the old shopfronts, Gulgong embraces its history, and it’s all around you. There are 130 National Trust-classified buildings in the area, and the township preserves more than 170 significant buildings constructed between 1870 and 1910.

Iron lacework, hand cut board facings and elegantly curved bullnose corrugated iron verandahs reflect the swing of fortunes. From the ornate columns and features of the Post Office Hotel to the humble former Australian Joint Stock Bank’s weatherboard front there is plenty to see, and history walks are available from the local tourist information centre in Herbert Street.

Writer Henry Lawson grew up at nearby Eurunderee, and many of his works, such as the famous Loaded Dog and his poem The Lights of Cobb & Co, recall incidents and people from his youth around Gulgong. Lawson’s face once decorated our ten dollar notes, as did a number of the images of Gulgong captured by Merlin and Bayliss. Mayne Street is home to the Henry Lawson Centre, which preserves many mementos of Lawson’s life and career, and the town hosts a Henry Lawson Festival every June long weekend.

The Prince of Wales Opera House in Mayne Street is another significant landmark, where Dame Nellie Melba sang one of her earliest public performances under her married name of Mrs Armstrong, and Les Darcy had his last fight before sailing for America. It was built out of bark in 1871 and is believed to have been the largest bark structure in the world when the town was exploding and optimism ran riot. It gradually evolved to its current form and is the oldest functioning opera house in the Southern Hemisphere. Now owned by the Gulgong Amateur Musical and Dramatical Society, from here you can participate in guided tours and see Australian folk theatre at its best.

Rolf Boldrewood (real name Thomas Browne), author of Robbery Under Arms, used the piano at the Prince of Wales as a desk to write The Miner’s Right, based on his local experiences as a mining warden.

If you are of a musical mind there is also the annual Gulgong Folk Music Festival in late December or early January as well as the Gulgong Show in February or the newly established Chinese Gold Festival, with its camel races. The Gulgong Markets are held on the fourth Saturday of each month.

While the local gold deposits are largely depleted there is still a little bit of “colour” to be extracted from local streams. The Gulgong area is renowned for its clays, which make it a home for some well known and highly respected potters, and the centre and hosts an internationally acclaimed ceramics festival every three years.

In the wider region there are many attractions worth travelling for. The nearby city of Mudgee, 25km to the south, has a great reputation as a wine producing centre, and an alfresco lunch overlooking the vines, with a glass of selected local vintage is a great way to relax. Fine restaurants and the regular weekend markets reflect the strong growth in food culture in recent years.

Further afield you can drive to the Putta Bucca Wetland, just north of Mudgee, The Drip, a towering cliff adorned with grasses and ferns fed from seeping springs high up above, 37km from Gulgong on the Cassilis Road, or the nearby Hands On Rock, a sheltered overhang richly painted with Aboriginal art. Campers can also use Gulgong as a hub for touring the Wollemi National Park and Dunns Swamp near Rylstone, Capertee, and the Goulburn River or Coolah Tops national parks, or to fossick for either gold or gem stones in the creeks or rivers around.

There is also the option for day trips to centres such as Wellington, Dunedoo, Dubbo, Rylstone, Kandos or the once-rich goldfields towns of Hill End and Sofala.

When Bernhardt Otto Holtermann struck the largest single lump of gold ever dug from the earth, a 630lb (286kg) nugget hauled from Hill End, he financed two photographers, Beaufoy Merlin and Charles Bayliss, to record the lives of his fellow miners and of the town’s prosperity.

The glass plate negatives were lost in the late 19th Century, but were rediscovered in 1951 in a garden shed in Chatswood, NSW. They’re stored at the State Library of NSW and are regarded as the most valuable collection of early Australian goldfields life.

Their existence is a marvel. Each plate was coated with light sensitive emulsion, in perfect darkness, carried in a light-proof holder, attached to the camera, a dark slide removed and the photo taken for up to 10 seconds, then the dark slide reinserted and the plate returned to absolute darkness for processing of the image, all within an hour.

Once tagged the “greatest wonder of the world,” the American Tobacco Warehouse and the adjoining building are in disrepair but locals are working to restore them for a place to exhibit the Holtermann collection in interpretive displays.

The recent CamperTrailer Group annual gathering raised more than $3600 towards their restoration.

The term “waltzing Matilda”, referring to going walkabout with a swag, comes from German gold diggers. At home, apprentices carried their bed roll, or matz, from town to town in the search of work. The Valkyrie, Hildr, was one of the gods of war who consoled the slain and the victorious. As the apprentices walked or ‘waltzed’ through Germany, their Hildr accompanied them in the form of their mattress.

On the Gulgong goldfields, the matzhildr inspired a new use. Anxious to learn the waltz, single miners swung ropes over the rafters of the Prince of Wales Opera House, attached their swags, and used them as dance partners in the hope to one day have the skills to attract a young lady.

Literally, they were waltzing their Matilda.

Check out the full feature in issue #95 December 2015 of Camper Trailer Australia magazine. Subscribe today for all the latest camper trailer news, reviews and travel inspiration.