Somebody, for some unknown reason, thought it would be a great idea to leave the comfort of two roaring fireplaces at home in order to go searching for some snow. Then he thought it would be a great idea to actually set up the camper and camp in the fluffy white stuff. Yep, that’s right. With reports of a cold front making its way just west of the Blue Mountains, NSW, myself and Matty (our photographer) had the Troopy packed and loaded up with the Cub Kamparoo Brumby quicker than you can say ‘supercalifragilisticexpialidocious’!

Now, in all honesty, we left the trip just a tad late. Coming up through Katoomba, the snow was already melted, so we made our way over to the crispy cold air of Oberon. On the way, you’ll spot signs to Oberon Dam, which I’ve driven past a million times previously and never stopped. 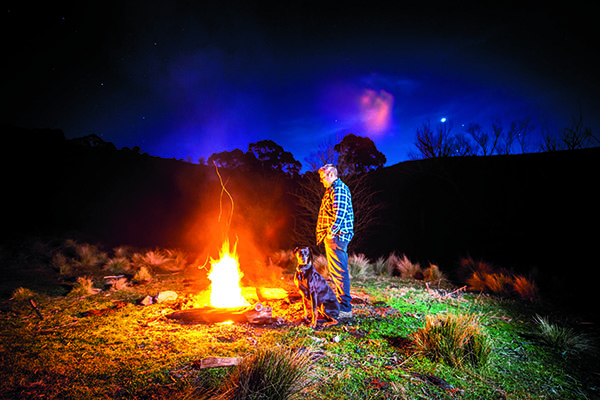 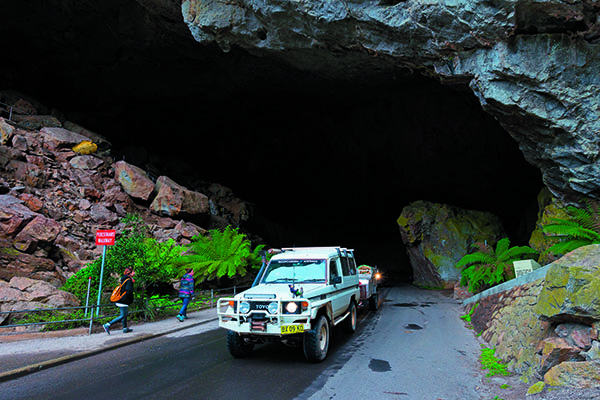 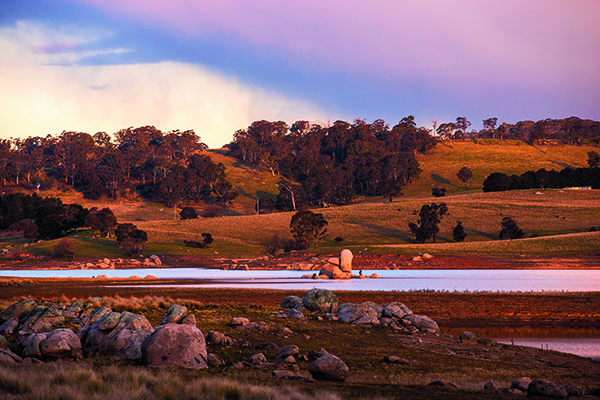 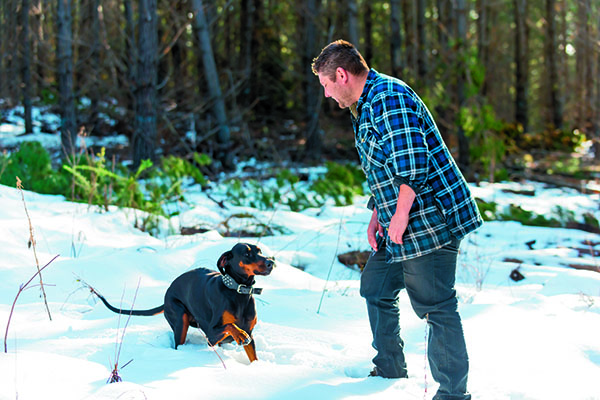 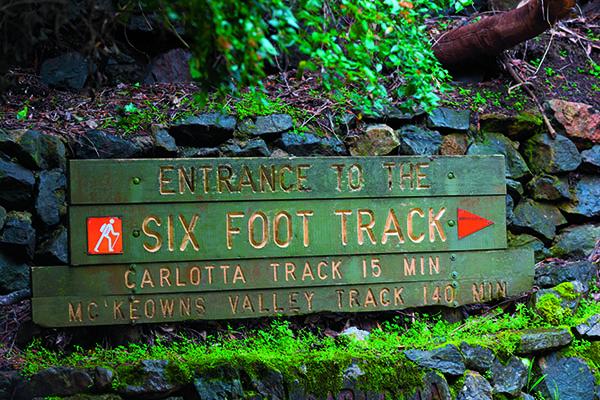 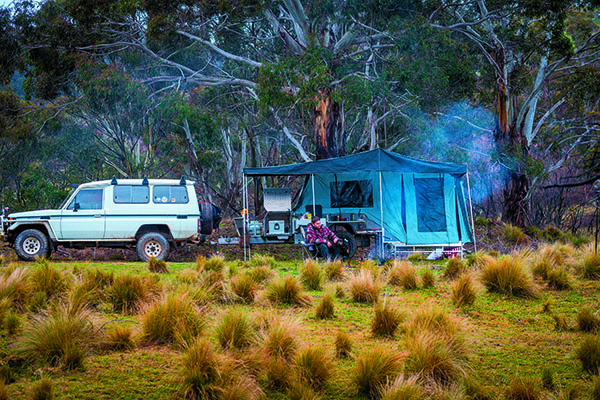 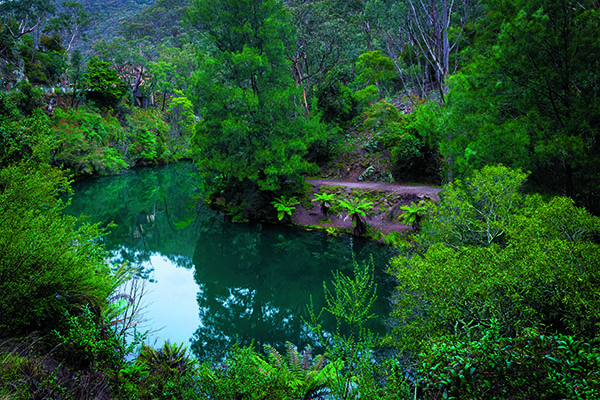 But with adventure and exploration on my mind, it was time to drop in and see exactly what it had to offer. And, boy, am I glad we did. Just on sunset, the colours and mood of this area were really something else. Large boulders are scattered everywhere in an almost organised mess, and the water was as calm as, well, calm can be. The only problem – it’s fully fenced off so you won’t get your car in there. On the bright side, the dam is boat-friendly and full of fish, so bring your tinny and a bottle of luck!

From there, it was time to find a camp. We ended up backtracking a few kays to a secret little spot I discovered a little while back. It’s a reserve that sits on the Fish River, a tributary of Oberon Dam. To get there, turn off Duckmaloi Road on to Karawina Drive and follow it to the right all the way to the river. When you’re towing a camper trailer, the descent to the actual river bank is best tackled in low range, especially if it’s raining. When you get to the bottom, you’ll find the campsites are scattered right along the fresh but bloody freezing cold river stream. Firewood’s plentiful up the top, and it’s a nice quiet spot – during the week, anyway.

From the crystal clear waters of Fish River, it was time to continue the search for white gold, or snow, as some people call it. So we hit the road and headed towards Jenolan Caves, which is just a few clicks out of the way and well worth the effort. Jenolan Caves is definitely a must-see destination if you’re exploring this area. Granted, it’s a bit of a touristy post these days. There’s a truck-tonne of different tours, accommodation, dining and facilities available. While it’s not your typical offroad adventure, the limestone caves have been called the most impressive in the country for a reason, and they’re estimated to date back at least 340 million years. If you’re up for a challenge, try taking an adventure caving tour: there’s a Legends, Mysteries and Ghosts tour for those who don’t scare too easily. Make sure you check out Blue Lake, which is one of the most magical things you’ll ever see, and keep an eye out for the platypus, which calls this area home, too.

With no snow in sight at Jenolan Caves, it was time to head further up the mountains towards the town of Oberon. The majority of Oberon is 1000m above sea level, which should just be high enough to welcome the last few drabs of snow. We wound our way up through the hills and, if I’m totally honest, things weren’t looking too good. Just when I thought it was game over, I spotted a body of water on the side of the road and, low and behold, there was snow right around it.

The dam itself had a thick layer of ice on it, too. I threw a few sticks that just bounced across the top of the ice; how cool’s that? Finally we had found the elusive white stuff: the only problem being there weren’t any tracks to explore. After a few happy snaps, we were back on the road, with plenty of optimism, too, I might add. As we rolled through Oberon, the streets were lined with thick blankets of snow, and the tracks leading out were exactly what we were after.

I’ll tell you what, there’s nothing like it. The second your wheels make first contact with snow, you’ll feel like a baby taking its first steps – it’s that much of a thrill! You’ll slip and slide as you try to find your feet, all while a feeling of pure exhilaration starts to take over. I can honestly say, out of all the different terrains I’ve tackled, snow driving dead-set tops the chart for me! After all, there’s nothing more rewarding or more satisfying than ploughing your way through a terrain that makes you feel like you’re on a completely different planet.

Now, it must be said, we weren’t going in blind here. We only drove tracks that had clearly been driven by others so we could see where we were going and knew there weren’t any obstacles lying under the snow.

So the next time you head off on a weekend adventure, why not set yourself a bit of a challenge? It’s a sure-fire way to add a bit more excitement to your trip!

1. Snowy areas are notorious for being super slippery. So make sure you grab yourself a good set of snow chains and learn how to fit them correctly before you leave, so you’re not stuck trying to figure it out in the cold. The snow chains basically give you the traction you’ll need to maintain control of your vehicle, so they’re worth their weight in gold, in my opinion.

2. If at first you don’t succeed, back up and have another go. The idea is to compress the snow down every time you drive over it, until it’s hard enough to get some traction. So make sure you drive in the same wheel ruts each time and you should eventually plough your way through.

3. You never really know what lies beneath a blanket of snow. Deep ruts are a major concern, especially because half the time you won’t know if you’re even on the track. Sticks, boulders and a million different obstruction could be a hazard on your path, so stick to previous wheel tracks when possible, and be super careful if you’re driving on virgin territory.

Check out the full feature in issue #93 October 2015 of Camper Trailer Australia magazine.